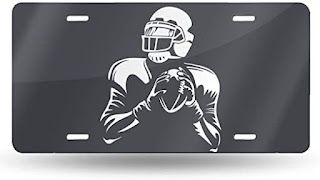 I must confess that watching college and pro football games gets too much of my attention. Worse yet, it triggers unfortunate emotional outbursts at teams and players who underperform and stink up the joint—meaning stadiums. Judging by fan reaction in the stands, I’m not alone.

With our Comcast subscription, I am able to watch NFL Live—a one hour gabfest that often includes two to three female football enthusiasts, several former players, and the inimitable Adam Schefter. He’s 54 years old but must spend an inordinate amount of time getting facials. He looks 36. He’s both a writer and a television analyst.

The program almost lost me during the NFL downtime that runs from February (after the Super Bowl) into August. There’s one huge NFL coverage event in April known as the NFL Draft—which now has become a colossal multi-day over-dramatized event bringing in millions of ad revenue.

As this year’s draft was about to get underway, “Schefty”—as he’s known by colleagues—broke the “stunning” news that Green Bay Packer quarterback Aaron Rodgers was having a snit fit with Packer management. For the next two to three months, Rodgers became talking point number one for the hosts. Each weighed in on meaningless thoughts about whether he would stay or go. And…if he would leave, which team should sit up, speak, and roll over to pursue this multi-zillion dollar QB.

The NFL Draft itself is all about first round draft choices and how much money they will get. Any simpleton knows that agents for these players have dollar signs hidden within their corneas. The more the player is paid, the bigger their share.

To be fair, this money grubbing isn’t just an NFL specialty. It happens in most sports. But I’m particularly turned off in hearing about some outrageous financial package given to a player while “Schefty” and company proclaim, “He’s worth it.” No…he’s not.

The latest bonanza of money bills was just awarded to, appropriately, the starting quarterback of the Buffalo Bills. Once again, “Schefty” was on top of this story. He let us know that QB Josh Allen and the Bills came to agree on a six-year contract extension. According to ESPN, Josh hopes to be paid the full $258 million. He’s reportedly guaranteed $150 million! For six years of work.

The Kansas City Chiefs quarterback is Patrick Mahomes. He signed a 10-year contract extension worth up to $503 million last year. The record-setting deal locked him in with the Chiefs through the 2031 season. Who knows, by then he might OWN the team!

After the Josh Allen extension was signed, the NFL Live hosts were gleefully mentioning several quarterbacks likely salivating over the riches awaiting them in the days ahead. That’s because every time a speciality player (quarterback, running back, wide receiver, or star defensive player) is blessed with a new deal, their fellow competitors often threaten to sit out the next season unless their cushy contract is “renegotiated.”

Oh I’ve heard the arguments. Players have short careers. They risk job-ending injury. They’re “elite” talent. They also play one game a week. Seven games a season. They sit for a good part of each game. And have months off.

On top of their paydays from the team, players also can cut generous deals for sponsorships. They get treated like royalty in many cities. Heroes. Truly special people. And now, college athletes are getting in on all these goodies!

It only works because our football addiction generates gazillions from media coverage and advertising revenue, ticket sales at games, merchandising, and any other way people find to squeeze money out of fans. When you’re hooked on anything you become easy prey.

Athletes, like all who have special gifts and talents, have been given these abilities by God. Their true eternal value is measured only by their Kingdom pursuits. Fame and wealth often become their downfall.

The wealthiest man in time, Solomon, at some point wisely asked God for this, “Make me absolutely honest and don't let me be too poor or too rich. Give me just what I need.” Proverbs 30:8 (CEV)

He looked upon the glories gained on earth as “vanity.” So should we.
That’s Forward Thinking. Click on the link to the right to connect via Facebook.
You can find a number of YouTube episodes and podcasts of Mark’s program, Moving People Forward at https://www.youtube.com/channel/UCosyuBzdSh1mXIas_kGY2Aw?
For more information on the Elfstrand Group, please visit www.elfstrandgroup.com
Articles of interest:
https://fortune.com/2021/07/21/bryce-young-nil-deals-endorsements-name-image-likeness-ncaa-sponsors-nick-saban/
https://chiefswire.usatoday.com/2021/07/06/kansas-city-chiefs-patrick-mahomes-contract-extension-anniversary/
https://www.espn.com/nfl/story/_/id/31973651/buffalo-bills-qb-josh-allen-agree-6-year-253m-extension-150m-guaranteed
Posted by Mark Elfstrand at 1:00 AM