Spying in the Neighborhood 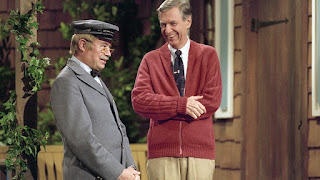 
Things are about to change in Mister Rogers' neighborhood. And a lot of other places, too. Coronavirus capers, like not wearing masks or sitting too close or having guests to your home, may soon break up that old gang of yours.

We are slowly moving into a time of very unneighborly behavior. The Chicago Tribune put a spotlight on the issue in their recent story, "The Social-Distancing Police are Among Us." Would you call out a neighbor for unsafe practices? Or call 911? The answer to both questions in the headline is, “YES!!”

And how are these watch guards responding? At least in Chicago, “Some shout, some gesture and expect you to get the point. Some call actual police, phone an aldermen, even email their park district.” And, yes, some go as far as to call 911.

Social media is a popular reporting option, too. Pick your poison. The vigilantes may opt to share your bad behavior on Facebook, Twitter, or that neighborhood app known as Nextdoor.

Try this on for size. In April, Claire Ewing of LaGrange went for a walk with her husband. Along the way she sees something akin to a block party. Apparently these people were NOT observing social distancing. And while Claire is normally quite neighborly, this set her off. So she posted a note about said behavior on Nextdoor. Over 160 responses came in. Claire said she was “aghast” at how often neighbors tell her to mind her own business.

Suppose you call the police? Will they tell you to mind your own business? The Trib claims Chicago police “have made more than 7,000 stops since March 25th about a lack of social distancing or failure to wear masks.” A good number of those came from anonymous tips by “concerned citizens.”

But as good citizens should realize, we are not alone! With the COVID-19 pandemic creating disdain for its likely source, Chinese officials offered cash rewards for tattle-telling on violators. New Zealand set up a website to get the juice on the non-cooperatives. It crashed from too much volume. Canadians in Toronto have something they have now designated, “the snitch line.”

We’re not done. New York City Mayor Bill de Blasio apparently told his constituents “we need those photos (of social-distancing violations), we need those locations so we can enforce right away.” Atlantic Magazine reported that Massachusetts nursing home residents were threatening to circulate a list of “noncompliant” fellow residents. Apparently, they never watched Mr. Rogers.

Isn’t there a fair argument to be made that people who ignore the rules put the rest of us at risk? They do. But they put themselves at more risk.

Just five months ago, we sent out those “Peace on earth” greetings to neighbors and friends. Now we’re sending peace officers to their homes! Can’t we all just get along??? (Answer? Apparently not.)

Depending on how this virus spreads in the days ahead, I do think it might get worse before it gets better. It’s never an easy call to decide to put people on notice for their behavior. I’ve been tempted many times.

Those of us in the faith with higher objectives realize an impatient move on our part—justified or not— might well result in broken relationships not easily repaired. In the 2020 version of a Sermon on the Mount, Jesus might say, “Blessed are those whose love for their neighbor causes them to pray for them, not on them.”

Jesus sort of did say something like that. In His original hillside version, He said, “God blesses those who work for peace, for they will be called the children of God.” Matthew 5:9 (NLT)

Hard to be sure what Mister Rogers would tell us. But I’ll bet he wouldn’t be a spy.
That’s Forward Thinking. Click on the link to the right to connect via Facebook.
Enjoy the new Moving People Forward YouTube program and podcast at https://www.youtube.com/channel/UCosyuBzdSh1mXIas_kGY2Aw?view_as=subscriber and https://www.iheart.com/podcast/966-moving-people-forward-49183339/ respectively.
For more information:
https://www.chicagotribune.com/coronavirus/ct-ent-coronavirus-social-distancing-police-neighbors-20200513-2t4bli7gpfcmpbik4qcyf2hf6m-story.html
Posted by Mark Elfstrand at 1:00 AM