It’s been years since we said goodbye to the military draft in our country. The final authority to induct expired on June 30, 1973. The lottery went on however, until the last pick on March 12, 1975.

I was in the draft class of 1970 and was called up in the fall of that year. Because of my poor planning, I was unable to register in time for fall classes to earn a deferment. I even tried to appeal my call to duty being an important means of support for my widowed mother. Uncle Sam showed no mercy.

By April of 1971, I headed off to basic training at Lackland Air Force Base in Texas. Six weeks later, it was tech school training in Biloxi, Mississippi. Then, to my first duty station in Sacramento, California.

By enlisting instead of accepting the draft’s choice of where I would serve, I was able to sign on with the Air Force. It would cost me two more years of military time, but I would likely avoid the most unpleasant task of dodging bullets in Vietnam. Many, if not most, Marines and Army recruits got that plum assignment.

Make no mistake about it. Some of them wanted that duty! Call them super patriots. Call them danger or thrill seekers. I called them a bit crazy. I mean, who signs up for war? Why tempt fate?

What do you call those men like me who yearned to stay back? There were, of course, the draft dodgers. Others flaked out in basic training. My type were those who chose what appeared to be the safest path to get back into civilian life alive.

It is for this reason that I have my own deep appreciation for the men and women who pay the ultimate price of service—their very lives. And that appreciation goes even another level deeper when the true heroes are those who DO step up and volunteer to face the line of fire. Or the grenade. Or the incoming rocket.

In a poignant article written for Memorial Day by Joe Angelino, we find this compelling perspective on recruits: “The military uses lots of glorified words to define them and attract attention. Words like duty, country, service, commitment, faith, honor, and courage are used to recruit and motivate the young service members. One word never seen on bumper stickers or barracks posters is death, and that is the word that brings all of those other words of bravado into crystal clear focus.”

It’s true. Offering the choice to die is a lousy selling point. Many a heartbroken mother or father has been seen shaking their heads in wonder as to why their precious child would choose that course. But many brave souls do. And many never return.

As Mr. Angelino wrote, “Soldiers, sailors, airmen, and Marines who have served in campaigns or theaters of action seldom talk about the ‘what if’ or how they would like to be remembered. They don't have to; they know if their demise comes far from home, their comrades in arms will never forget them. They know their hometown will remember them, for at least one day a year. Their family will most certainly remember them, because, for the family left behind, every day is Memorial Day.

Do we not owe it to those who have put aside fear for faith and the cause of freedom to pay tribute for their service today? We do. And we owe so much more.

COVID-19 has changed the game on this Memorial Day. Reflection should be easier. We certainly have more time for it.

The Bible frequently calls out brave and valiant men. To some it came as a surprise. An angel visited Gideon, the least of the least of his tribe, with these words, “The Lord is with you, mighty warrior.” Judges 6:12 (NIV)

Memorial Day honors our mighty fallen warriors. Most, who wielded a weapon for peace.

And for that dedication, I salute their sacrifice. 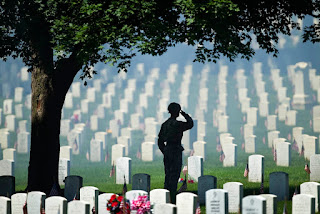 That’s Forward Thinking. Click on the link to the right to connect via Facebook.
Enjoy the new Moving People Forward YouTube program and podcast at https://www.youtube.com/channel/UCosyuBzdSh1mXIas_kGY2Aw?view_as=subscriber and https://www.iheart.com/podcast/966-moving-people-forward-49183339/ respectively.
For more information:
https://www.evesun.com/news/stories/2020-05-20/33141/A-Memorial-Day-like-none-before
Posted by Mark Elfstrand at 1:00 AM