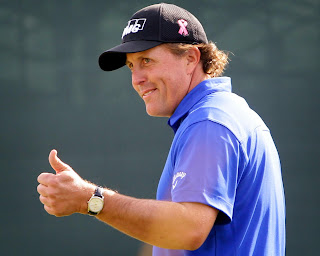 I know people who can’t stand watching golf. It moves way to slow for them. Waiting and waiting for shots to be lined up and, most often, missing the desired target.

Count me among the faithful followers of the sport. Seeing a putt go awry on the final hole of a tournament can cost a man over a half a million dollars…it reeks of pressure. Disappointment. Even failure in front of an audience of millions. It’s high drama to me.

I have a most favorite golfer. It’s Phil Mickelson. You should have heard of him by now. He’s been playing the game professionally since 1992. He has won 55 tournaments. And on May 23rd, he celebrated victory in one of golf’s most prestigious annual events at the age of 50 years, 11 months and 8 days. That makes him the oldest player to achieve a win at a major. And it was glorious.

The odds were stacked against him. “Lefty” was considred to be a two-hundred-to-one long shot as the PGA Tournament got underway this year. In other words, don’t put any money on the old guy.

In the final round, he was paired with another golfer who has proven to be a very tough competitor: Brooks Koepka. He’s also a favorite of mine. Brooks has been dealinig with significant pain issues for several months. He’s still a good half-year away from full health. Yet me pushed through to finish second.

But the end of the round turned out to be extra painful for Koepka. Now it wasn’t just his knees. It was an aggressive–overly aggressive– crowd that moved onto the fairway on that final hole. Phil had a hard enough time making it through. Koepka found himself getting “dinged” by the insurgent group as he struggled to the finish line. And it made him angry.

Here’s how Brooks saw it: “It would have been cool if I didn’t have a knee injury and got dinged a few times in the knee in that crowd…I don’t think anybody really understands until actually you’re coming out of surgery how… get a little skittish.” Koepka had the surgery on March 16th to deal with a knee cap dislocation.

The CEO of PGA of America, Seth Waugh, felt the need to apologize to both Mickelson and Koepka for the out-of-control scene. It brought spectators rushing past the barrier ropes, marshals, and security as the two golfers played the 72nd hole of the tournament. Waugh admitted that the scene “made two players and their caddies feel vulnerable” as security felt overwhelmed.

All that being said, it was Phil’s day to shine. He didn’t excessively dish out praise, but appropriately recognized his strongest supporters. “With the help of my wife Amy, my brother Tim, and my coach Andrew Getson, I’ve been able to get back to playing golf at the highest level and it’s so fulfilling and rewarding, and this is a moment I will cherish forever,” said Phil before receiving the Wanamaker Trophy.

Mickelson added that he “just believed that it was possible, yet everything was saying it wasn’t. I hope that others find that inspiration.” He had faith in his game.

Hebrews 11:1 is among the most well-known verses on spiritual faith. It reads, “Now faith is the assurance of things hoped for, the conviction of things not seen.” (ESV) Our future with the God of the universe rests in our application of true faith.

Jim Nantz was eloquent in summarizing the remarkable achievement and the enduring popularity of Phil Mickelson. He commented, as Phil approached the final green with his throng of fans following, “Phil defeats Father Time.” It certainly appeared to be true.

I can say this. He was an inspiration to me. I hope Lefty realizes God gave him that talent.
That’s Forward Thinking. Click on the link to the right to connect via Facebook.
You can find a number of YouTube episodes and podcasts of Mark’s program, Moving People Forward at https://www.youtube.com/channel/UCosyuBzdSh1mXIas_kGY2Aw?
For more information on the Elfstrand Group, please visit www.elfstrandgroup.com
Articles of interest:
https://www.denisonforum.org/columns/sports/phil-mickelson-becomes-the-oldest-golfer-to-win-a-major-title-finding-the-vital-balance-between-tradition-and-innovation/
https://www.golfchannel.com/news/pga-ceo-apologizes-phil-mickelson-brooks-koepka-fans-rushing-18th-hole
Posted by Mark Elfstrand at 1:00 AM