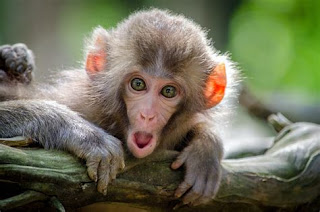 I like the line, “What a strange breed we are” when it comes to humans. But it’s getting stranger. There’s some monkey business going on.
In case you missed it, scientists in China (wasn’t that where the coronavirus originated?) have fertilized eggs extracted from cynomolgus monkeys and grown these bad boys in culture. Simply put, these not-so-divine embryos are part human and part monkey.

According to a Nature story, “Six days after fertilization, the team injected 132 embryos with human extended pluripotent stem cells, which can grow into a range of cell types inside and outside an embryo. The embryos each developed unique combinations of human and monkey cells and deteriorated at varying rates.”

Why do such research? The playful minds at work on this hope that the hybrid humans could maybe…a) be used to test drugs and b) be used to grow human organs for transplants. They call them “chimaeras.” (Now I’ve got Dick Van Dyke singing some absurdity from Mary Poppins in my head!)

Developmental biologists are not so sure about this latest development. That’s because the monkey primates get a little too close to home in some respects. And the rules for playing the breeding game get very different with homo sapiens. I’ve long had suspicions about Planet of the Apes!

Voices I tend to trust on such issues include friends at the Discovery Institute in Seattle. In describing their organization’s philosophy, they state, “Mind, not matter, is the source and crown of creation, the wellspring of human achievement. Conceived by the ancient Hebrews, Greeks, and Christians, and elaborated in the American Founding, Western culture has encouraged creativity, enabled discovery, and upheld the uniqueness and dignity of human beings.”

Note that important last line…upholding “the uniqueness and dignity of human beings.” In writing about this human-monkey hybrid experimentation, Discovery’s Wesley J. Smith has gripes. For one thing, he doesn’t like it that U.S. and other Western scientists who could not get funding for such research instead flew to China to conduct the experiments.

His second objection was that he feels the work “cuts across crucial moral boundaries.” The cells being bred go beyond having “bone or kidney tissue, but also brain neurons.” Smith asks, “What might result from such a combining? I don’t think we should find out.”

Thirdly, there’s the lax policy on regulations internationally on this research. Scientists are unwilling to commit to strong restrictions. And Smith notes the International Society for Stem Cell Research (ISSCR) only offers general guidelines which are way too lax–essentially deeming them worthless.

In fairness, it’s a very premature form of research. Juan Carlos Izpisua Belmonte, director of the Salk gene expression laboratory, led the research effort. He explained that the human-monkey chimeras can’t survive longer than 19 days. At present. And Dr. Izpisua Belmonte said, “It’s never been our intention and never will be to create a living chimera in a monkey host.”
In reporting on this development, the Wall Street Journal recalled some earlier experimentation: “In a glimpse of the potential effects, researchers at the University of Rochester in 2014 transplanted human fetal brain cells called astrocytes into young laboratory mice. They discovered that within a year the human cells had taken over the mouse brains. Moreover, standard tests for mouse memory and cognition showed that the altered mice were smarter.”

It certainly causes us to question, “Are you a man or a mouse?” Hmmm.

No more monkey business.
That’s Forward Thinking. Click on the link to the right to connect via Facebook.
You can find a number of YouTube episodes and podcasts of Mark’s program, Moving People Forward at https://www.youtube.com/channel/UCosyuBzdSh1mXIas_kGY2Aw?
For more information on the Elfstrand Group, please visit www.elfstrandgroup.com
Articles of interest:
https://www.discovery.org/human/2021/04/16/scientists-make-human-monkey-hybrid-embryos/