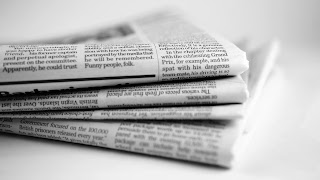 The Chicago Tribune has new owners. The historic paper will soon follow the directives of Alden Global Capital, a hedge fund based out of New York. NPR in reporting the transaction chose this for their headline, “‘Vulture' Fund Alden Global, Known for Slashing Newsrooms, Buys Tribune Papers.” I guess we know where they stand.

Several other papers are included in the purchase. The Baltimore Sun, New York Daily News, and major metro papers from Hartford, Connecticut to Fort Lauderdale, Florida. No doubt journalists in all of those newsrooms are starting to shake in their boots. Vultures can scare people.

The union members in several cities made their voice known they were unhappy. One education reporter referred to the pending sale as “Project Mayhem.” Other suitors showed up, but none could prevail. That included some fairly wealthy business types who may, in their own way, be vultures. Who knows? One man’s liberal thief is another man’s vulture.

Wish I had the money. I’d like to buy out the nation’s second largest newspaper—the USA Today. Once one of my favorites, the incredibly shrinking daily has much more frequently become an enemy of conservative thought. The faith community included.

A most recent example was the editorial they featured from one of their sports columnists, Mike Freeman. His piece, published in their May 5th edition, bore the headline, “Don't use Dallas Cowboys' name, AT&T Stadium to mainstream anti-trans hate.” Now what “haters” is he talking about?

Why none other than the highly Gospel-centered, manhood strengthening, and encouragers to “love your neighbor”group—Promise Keepers (PK)! If you’ve never attended a PK event, you’re missing out. Thousands upon thousands of men join together as brothers—praising God and hearing how to live a God-centered life.

For columnist Freeman, the line is crossed when “God-centered” doesn’t agree with his own version of the commandments and the Bible. As you can well imagine, his resistance finds its home in the PK view that the LGBTQ lifestyle is contrary to biblical teaching. Is this a shocking thing? Today it seems to be.

Okay. So Freeman disagrees with that view. He has his right. But he doesn’t simply stop by saying he has a negative view of Promise Keepers. Instead, he wants to control their right to meet in a city-owned facility: AT&T Stadium in Arlington, Texas.

Perhaps he mistakenly thinks that the Dallas Cowboys OWN the joint. They don’t. Nor does AT&T. They have naming rights. Regardless, Mr. Freeman wants Jerry Jones and the liberal AT&T hierarchy to use their power and influence to stop Promise Keepers from holding their event at the stadium.

I don’t know this reporter’s “persuasion,” but he uses the typical garbled thinking to suggest that the truly spiritually minded among us “hate” those who don’t share our views. I’m not sure how much time he’s spent with a small group of PK men, but it would be eye opening if not life changing for him.

Freeman considers himself a social issues hero for wanting men who claim to be women to play competitive women’s sports. He also takes a cheap shot at the declining numbers of self-described “Christians” in our culture today. His axe has much to grind.

So does mine. Like I said earlier, I wish I had the resources to acquire papers like the USA Today. The Tribune news outlets fear for their journalistic lives with cost-cutting. My axe would not focus on stripping away what’s needed to make a great paper. It would fall on people who turn it into a journalistic rag by character assassination of truly good works in our society. Like Promise Keepers.

Jesus said, “But if your eye is bad, your whole body will be full of darkness. If then the light that is in you is darkness, how great is the darkness!” Matthew 6:23 (ESV.) The “nation’s newspaper” deserves better than ambassadors of darkness.

Yeah, I would tighten the reins. But just enough to choke some of the evil out. I doubt Alden Global Capital will be so kind.
That’s Forward Thinking. Click on the link to the right to connect via Facebook.
You can find a number of YouTube episodes and podcasts of Mark’s program, Moving People Forward at https://www.youtube.com/channel/UCosyuBzdSh1mXIas_kGY2Aw?
For more information on the Elfstrand Group, please visit www.elfstrandgroup.com
Articles of interest:
https://www.usatoday.com/story/sports/columnist/mike-freeman/2021/05/05/dallas-cowboys-name-att-dont-use-mainstream-anti-trans-hate/4853968001/
https://www.christianheadlines.com/contributors/michael-foust/usa-today-dallas-cowboys-should-cancel-promise-keepers-rally-due-to-lgbt-stance.html
Posted by Mark Elfstrand at 1:00 AM