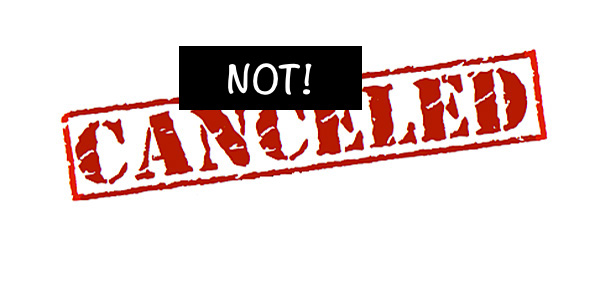 I’ve recently determined that it’s time I got more serious about joining the cancel culture. In fact, I likely have been moving that direction for a while now. Before I explain that, a review of the term is in order.

“Cancel culture” has only come to light in recent years. Some attribute its arrival into the collective consciousness around 2017. That’s when it became “hip” to "cancel" celebrities for things they said or did that the highly-culturally-sensitive crowd didn’t approve of.

A few can trace the now common activity of public shaming to earlier in the previous decade. Myles McNutt, a TV critic and assistant professor at Old Dominion University, tweeted in February, 2014, regarding the cancellations of TV series. He wrote: "It's unfortunate how renew/cancel culture has made 'not renewed early' read as canceled—'wait and see until pilots come in' is normal.”

Merriam-Webster, one of the authorities on all things word related, connects the term “cancel culture” to the #MeToo movement. Professor Lisa Nakamura from the University of Michigan explained via the New York Times in 2018 that what cancellation amounts to is a "cultural boycott" of a certain celebrity, brand, company, or concept.

Google Trends data revealed almost no search interest of the phrase "cancel culture" until late 2018 and early 2019. The most search interest came in July of this year (2020).

Former Chicago Bears middle linebacker Brian “Hairman” Urlacher just found out the hard truth of cancel culture. The Bears organization dissed Brian after his criticism of the NBA protests following the police shooting of Jacob Blake. The boys in the Bears front office responded, "The social media posts in no way reflect the values or opinions of the Chicago Bears organization.” Thank you, Brian, for all your great tackles, but you are not “us.” Canceled.

The retired Urlacher is displeased with the protests against racial injustice. He supports President Trump, even visiting him in the White House. Of course, the cancel culture would like to fully cancel The Donald—who, along with his family members, spoke out about “cancel culture” at his convention last week.

So how am I joining the cancel culture parade? Let’s start with the electronic news. They feed me things in the order they find important—and from their very slanted perspective. I’ve canceled watching that, unless it’s the weather.

I still glance at the New York Times and the Washington Post for headlines and rare stories of a non-political nature. Otherwise, I’ve canceled reading anything they write. The same goes for almost all opinion pieces in the Chicago Tribune. And frankly, a lot of what Christianity Today has published more recently I’ve canceled.

I’ve canceled watching any television shows revealing the true beliefs of Hollywood. And we’re moving that direction with movies, as the moguls introduce, by “force,” characters of an alternative lifestyle.
Goodbye.

And among my very favorites—televised sports—I’m fast forwarding past ANY of their patronizing promos to cultural resistance and protests. This includes a full pass on any national anthem protests or on field antics by players. And to go one step further, for those teams that “canceled” their recent games out of “protest,” I’ve canceled watching ANY of their games. Just don’t need the nonsense.

Here’s what I haven’t canceled. Truth. I know, from the Bible, that man is created in God’s image. All of us have worth in His eyes and therefore should have value in mine. No race is “superior.” I know that Jesus' message to “love one another” is all the call to action we need to do that in word and deed. Truth is found in Jesus.

And while I’m on my soapbox this week, I’m also not cancelling going to church in favor of sports or other activities shoved onto our Sunday schedules in more recent years.

The apostle John closed his writings in the book of Revelation with these words about the return of Christ: “Come, Lord Jesus.” Revelation 22:20 (NIV)

Amen!
That’s Forward Thinking. Click on the link to the right to connect via Facebook.
You can find a number of YouTube episodes and podcasts of Mark’s program, Moving People Forward at https://www.youtube.com/channel/UCosyuBzdSh1mXIas_kGY2Aw?
For more information:
https://www.insider.com/cancel-culture-meaning-history-origin-phrase-used-negatively-2020-7
https://www.haveeru.com.mv/bears-disavow-brian-urlacher-after-social-media-post-on-nba-protests-bleacher-report/
Posted by Mark Elfstrand at 1:00 AM