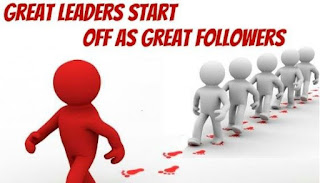 Rick Ezell is a chaplain serving with Employee Care of America. This group partners with businesses to improve productivity and profitability by providing care, coaching, and crisis management for employees. Rick previously served as a pastor in Naperville. Contact information is found below. He has allowed me to share from his recent web posting a two-part series on “Followership” as I enjoy a brief summer break. Today, Rick asks, “So what makes a good follower?”

Rick:
1. They complement the leader.
Followers don’t compete with the leader but complete the leader. It’s like a marriage. The husband and wife experience mutual submission; they don’t compete, but rather complement one another. Leadership is participatory. Leaders and followers exist in a mutually beneficial relationship where each adds to the effectiveness of the other. Good followers complement their leaders by using their gifts, speaking affirmation, displaying loyalty, and extending support. Without the help of followers, leaders are doomed to failure.

2. Good followers stand in the gap.
Often leaders have the vision, but lack the management and execution tools to see the idea become a reality. Leaders have needs, weaknesses, shortcomings, imperfections, that are often glaring. So, leaders need loyal and dedicated followers to fill the gaps in their efforts.

3. Good followers take the initiative.
Being a follower doesn’t mean that you just stand around and do nothing until the leader tells you what to do. Leaders provide the overall plan—the vision—but followers execute. Good followers know what to do without being told. Good followers don’t just do something; they do the right things.

4. Good followers make great leaders.
A study of 218 male Australian Royal Marines was conducted. The Marines differentiated themselves as natural leaders (with the skills and abilities to lead) or followers (who were more concerned with getting things done than getting their way). The researchers tracked the recruits’ self-identification as leaders and followers across the course of a physically arduous 32-week infantry training that prepared them for warfare in a range of extreme environments. The study culminated in the recruits and commanders who oversaw their training casting votes for the Commando Medal award to the recruit who showed most leadership ability. Who got the votes? Researchers discovered that those recruits who saw themselves (and were seen by commanders) as followers ultimately emerged as leaders. It seems that those who want to lead are well served by first endeavoring to follow.

5. Being a good follower teaches one how to value someone else’s opinion, consider others’ inputs, and develop emotional intelligence.
They care about their followers and will demonstrate it. They understand and appreciate the limits of their leadership and how their followers make or break them. No matter the number of subordinates, they see themselves as still human and share the same vulnerabilities, shortcomings, and struggles. They view the people they lead as their equals. They don’t punish employees who question and challenge them—knowing that being held accountable is an essential part of becoming a better leader.

6. The mission takes precedence.
Donald Phillips’ insightful book, Lincoln on Leadership, examines the character, behavior, attributes, and attitudes that made Abraham Lincoln our most honored and revered president. When Lincoln took office in 1861, he found that the United States was unprepared for war. The union had an insufficient, poorly trained, and poorly equipped army under the command of General Winfield Scott. As the war waged on, Lincoln went through general after general for three years before he finally found a responsible risk-taker man, and, most importantly, one who made things happen—Ulysses S. Grant. Lincoln could not have won the war without Grant. Lincoln was the leader; Grant, the chief subordinate.

It wasn’t until Grant was added to the mix that Lincoln and the Union Army found victory. In Grant, Lincoln found a strategic, aggressive, creative follower who took the initiative to accomplish the mission.

Donald Phillips comments: “All leaders should realize that they can’t do everything on their own. They simply must have people below them who will do what is necessary to ensure success. Subordinates who will take risks, act without waiting for direction, and ask for responsibility rather than reject it, should be treated as your most prized possessions. Such individuals are exceedingly rare and worth their weight in gold.”

Businesses, teams, governments, and churches can have leaders who possess exceptional vision and provide direction, just as Lincoln did. Still, they can’t succeed without people like U. S. Grant to carry out the mission.

Leaders need followers to execute the mission.
That’s Forward Thinking. Click on the link to the right to connect via Facebook.
Enjoy the new Moving People Forward YouTube program and podcast at
For more information:
You can email Rick st:
https://rickezell.com/2020/07/09/followership/
Posted by Mark Elfstrand at 1:00 AM