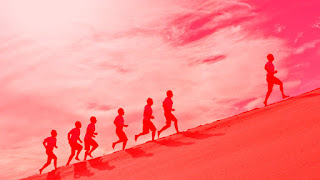 Rick Ezell is a chaplain serving with Employee Care of America. This group partners with businesses to improve productivity and profitability by providing care, coaching, and crisis management for employees. Rick previously served as a pastor in Naperville. Contact information is found below. He has agreed to allow me to share from his recent web posting a two-part series on “Followership” as I enjoy a brief summer break.

Rick: Curious. Did you take a college course on how to be a good follower? Ever been to a seminar on how to follow well? What about reading a book on followership? If I’d asked if you had read a book or attended a workshop on leadership, more than likely, you have.

A Ted Talk entitled “The First Follower” pictures a lone guy dancing at a festival. Soon another guy joins the first guy in the crazy dance. Soon others join until there is a crowd all dancing together. It provides an example of a movement that began with a leader, but would not have happened without the first follower and the subsequent others who join in. The video states: “Being a first follower is an under-appreciated form of leadership. The first follower transforms a lone nut into a leader. If the leader is the flint, the first follower is the spark that makes the fire.”

The video concludes with this lesson: “Leadership is over-glorified. Yes, it started with the shirtless guy, and he’ll get all the credit, but you saw what really happened: It was the first follower that transformed a lone nut into a leader. There is no movement without the first follower. We’re told we all need to be leaders, but that would be really ineffective. The best way to make a movement, if you really care, is to courageously follow and show others how to follow. When you find a lone nut doing something great, have the guts to be the first person to stand up and join in.”

Leaders need followers, and followers need leaders. Working together, they can accomplish many worthwhile projects and plans. Here are a few lessons I’ve learned along the way about followers and leaders.
1. Leaders need to be easy to follow.
Leaders need the big three: Character, Competence, and a Cause. They need to have the message, integrity, and focus that others are willing to follow. When they do, people follow. I read of a woman who said to her pastor, “Pastor, I would follow you on an assault on hell with water pistols.” That woman found a leader easy to follow. Army Colonel Tom Cordingly explained it this way: “When I served at Fort Knox, the executive officer I worked under would plan the strategy and then turn to me and say, ‘Make it so, Tom.’ I was his right-hand man, the ‘make-it-so’ guy. I found more satisfaction in the right-hand-man role than in leading. I’ve come to the conclusion: Give me a good man to work for, a man I love and respect, and I’ll be happy.'” It begins with the kind of leader that others want to follow. Interestingly, most great leaders are not charismatic. They simply have the qualities that make it easy for others to want to follow.

2. Leaders need followers.
Warren Bennis observed that leaders are only ever as effective as their ability to engage followers. Without followership, leadership is nothing. The key to success in leadership lies in the collective “we,” not the individual “I.”

In other words, leadership is a process that emerges from a relationship between leaders and followers who are bound together by their understanding that they are members of the same social group. Leaders are more effective when their behaviors indicate that they are “one of us,” because they share our values, concerns, and experiences, and are “doing it for us” by looking to advance the interests of the group rather than own personal interests.

3. Good followers have character, too.
Our culture places limited value on following. We celebrate the great leaders but dismiss the many loyal followers. But, to succeed, leaders must teach their followers not only how to lead, but more importantly, how to be a good follower. That requires integrity.

So…What makes for good followers? Rick Ezell answers that next week!
That’s Forward Thinking. Click on the link to the right to connect via Facebook.
Enjoy the new Moving People Forward YouTube program and podcast at https://www.youtube.com/channel/UCosyuBzdSh1mXIas_kGY2Aw?view_as=subscriber and https://www.iheart.com/podcast/966-moving-people-forward-49183339/ respectively.
For more information:
You can email Rick st: rick@employeecareofamerica.com. Or call 864-770-3560. The website is www.employeecareofamerica.com. The article can be found at:
https://rickezell.com/2020/07/09/followership/
Posted by Mark Elfstrand at 1:00 AM