Robinhood and a Not-So-Merry Man 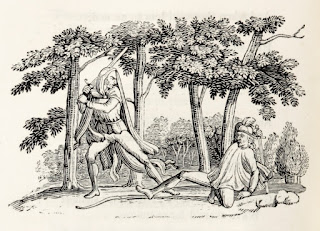 It was somewhere around noon when my wife and daughter recalled hearing the train whistle blow about a mile from our home. That’s unusual since restrictions are in place to keep noise down as the trains pass through heavily populated neighborhoods. A short while later, my daughter was en route home but had to alter her course because a stopped train blocked the crossing.

Our local police department let us know it was another train/pedestrian “incident.” This was the second within the last eight months on tracks within two miles of each other. One last November was a 17-year old who died. Apparently he was quite bright and well liked. I never did see a final report on what really happened.

The more recent death was a 20-year-old. It was definitely a suicide. The young man was Alexander E. Kearns. He lived in the area nearby but was home from the University of Nebraska. Again, another bright young mind.

Before explaining his seemingly dire situation, I must confess that I am always intrigued by suicides. Particularly among the young. That’s because throughout my years as a boy and as a teen, I cannot recall ever hearing of a suicide among classmates or friends. At least one or two happened a bit later in the lives of former classmates.

But the world is different today. According to Centers for Disease Control and Prevention, suicide is the third-leading cause of death for 15- to 24-year-olds.
Accidents and homicide take first and second place. Chicago ranks high in youth dying well before their time.

The experts at Stanford Children’s Health attribute a number of factors that push some kids over the edge. They list body changes, struggles with thoughts and feelings including stress, confusion, fear, and doubt. A pressure to succeed is listed. And other changes such as divorce, friendships, moving, or problems in school.

Alexander Kearns' story was quite different. This young man took up stock investing during the pandemic. He signed up with a millennial-focused brokerage firm known as Robinhood. In the first quarter of this year, the firm increased by 3 million new accounts—a record!

Mr. Kearns began experimenting in trading options. Several firms have begun offering commission-free trading and zero-minimum balances to attract the younger set. The opportunity was too good to pass up for Alexander.

Apparently, the bookkeeping practices of this kind of trading is more complex than it should be. As Forbes Magazine explained, Mr. Kearns fell into despair after checking his account with $16,000—BUT—also showing a cash balance of negative $730,165!! Kearns was shocked, as he never authorized the kind of trading that would yield those kinds of losses.

Alexander Kearns felt he had ruined his life—and others. But his losses were not real. His negative cash balance was only temporary and would soon be corrected—but not soon enough. Kearns prepared a suicide note. And then acted on it.

I’ve included a link below so that you can read the complete story. It’s more than sad. It’s tragic.

As King Solomon advised, “Wealth gained hastily will dwindle, but whoever gathers little by little will increase it.” Proverbs 13:11 (ESV)

Robinhood, based in Silicon Valley, has pledged major changes to their platform of options trading. They feel terrible about this young man losing his life. As they should.

My soul grieves when our youngest citizens lose their lives—be it by car mishaps, medical issues, or freak accidents of any kind. Suicide, however, is in a another category. It is so preventable.

The blast of a train horn was the last warning to Alexander Kearns to change his mind. Nearly three quarters of a million reasons told him otherwise.

I wish this Robinhood tale was another work of fiction.
That’s Forward Thinking. Click on the link to the right to connect via Facebook.
Enjoy the new Moving People Forward YouTube program and podcast at https://www.youtube.com/channel/UCosyuBzdSh1mXIas_kGY2Aw?view_as=subscriber and https://www.iheart.com/podcast/966-moving-people-forward-49183339/ respectively.
For more information:
https://www.forbes.com/sites/sergeiklebnikov/2020/06/17/20-year-old-robinhood-customer-dies-by-suicide-after-seeing-a-730000-negative-balance/#387295571638
https://www.stanfordchildrens.org/en/topic/default?id=teen-suicide-90-P02584
Posted by Mark Elfstrand at 1:00 AM