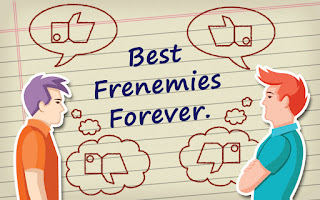 There are lots of good quotes about how to deal with enemies. Here are a few:

“Always forgive your enemies; nothing annoys them so much.” ~ Oscar Wilde
“Never interrupt your enemy when he is making a mistake.” ~ Napoleon Bonaparte
“A man with no enemies is a man with no character.” ~ Paul Newman
“He will never have true friends who is afraid of making enemies.” ~ William Hazlitt

Now that we’re on the subject, how many enemies do you have? Probably more that you think. One dictionary tells us an enemy is “a person who is actively opposed or hostile to someone or something.” Well, I’m convinced that we all have some ”enemies” who may be quite passive.

We live in a new world of making enemies. Social media has introduced us to many of them. For example, people we believe are Facebook “friends” may suddenly turn on us after we state our views or “like” something they find objectionable. Some go so far as to “unfriend” us. So if I’m no longer your friend, what am I? I think it starts with “e.”

If you want a quick path to developing a host of enemies, run for political office! You don’t even have to win. Just run. Haters will come out of the woodwork!

One thing for sure. You don’t have to do anything wrong to have enemies. Just show up. And it starts early. Maybe even in pre-school. Definitely by high school. And some of the most popular kids also have the most enemies. Maybe they’re the best athletes. Or have the best voices. Or are simply too good looking. Grrrrr!

Here’s the thing. You may try your hardest to not have those enemies. It doesn’t matter. That’s because the evil that lurks in bitterness and resentment is not easily fixed. Sometimes we are unable to get past our deepest feelings and so taking it out on others becomes the way we deal with pain.

Truth be told, I don’t like the Green Bay Packers. At all. I really don’t care much for that Aaron Rodgers guy. Even as I am a loyal State Farm customer, I zoom past any commercial that has Aaron Rodgers in it. How did these men become my enemies? Easy. I’m a Vikings fan and have been one since 1961. I’ve died painful deaths in those 58 years. And Aaron Rodgers has caused me much grief.

But how about this? If you are married, should the enemies of your spouse become YOUR enemies? A recent article in New Yorker magazine raises the issue. It’s titled, “My Wife’s Enemies are Now My Enemies, Too.”

I thought it all might be tongue-in-cheek. But maybe not. Author Josh Gondelman says his wife taught him “the fine art of having enemies.” After marriage and allowing for time, he writes, “Your friends become each other’s friends. Your families become one another’s families to whatever extent is desirable or possible.”

But what about the flip side? Josh believes you also “acquire an increasingly vast assortment of enemies. Enemies-in-law, to put it more precisely. Childhood bullies. Estranged best friends. Snotty adult cousins. Professional nemeses. Celebrity grudges. Unaffectionate neighborhood dogs. These may be your partner's enemies, and if you’re devoted, they’ll become your enemies too.”

Hmmm. Hadn’t really thought about that. Probably truer than I realize.

Abraham Lincoln tried his best to deal with enemies kindly. He once said, “Do I not destroy my enemies when I make them my friends?”

Where would he get such a crazy idea? Maybe from….Jesus! It was His radical approach that shocked crowds when He instructed them (and us), “You have heard that it was said, ‘Love your neighbor and hate your enemy.’ But I tell you, love your enemies and pray for those who persecute you…If you love those who love you, what reward will you get? (Selected verses from Matthew 5:43-48, NIV)

Well, it’s a new year…2020. Time to get things on the right track. Like learning to love your enemies.

But be patient with me. I’m still having problems with those Packers. And Aaron Rodgers.

That’s Forward Thinking. Click on the link to the right to connect via Facebook.
Enjoy the new Moving People Forward YouTube program and podcast at https://www.youtube.com/channel/UCosyuBzdSh1mXIas_kGY2Aw?view_as=subscriber and https://www.iheart.com/podcast/966-moving-people-forward-49183339/ respectively.
For more information:
https://www.thecut.com/2019/12/my-wifes-enemies-are-now-my-enemies-too.html
Posted by Mark Elfstrand at 3:00 AM