Back in the 1990s, I was encouraged by the manager of the radio station at which I was employed to take a one day personal retreat. His thinking was that, like many in the radio business, I had heard the advice to “just be yourself” when on air. Often, however, we are impacted by those who have achieved significant success. And it’s easy to try and use their “techniques” to build your own profile. It doesn’t work. You lose the authenticity of who you really are.

So the one day retreat was to get alone and dig deeper into the person God created me to be. A more reflective search would also yield some very honest appraisals of the fears or self limitations that I might have placed on myself. Giving yourself such a hard mirrored look and journaling about it is rather uncomfortable.

Frankly, time alone will often allow things to surface that otherwise are hiding in your soul. Because sometimes we can be our own worst enemy, it’s possible to allow those negative impressions to keep us from moving forward. Many a motivational speaker has made a living out of helping people get beyond these self limitations.

I found some important lessons on the value of solitude recently in the New York Times. The article, "Why You Should Find Time to be Alone with Yourself," cites Robert Coplan, a developmental psychologist and professor of psychology at Carleton University. He notes, “Historically, solitude has had a ‘pretty bad rap’ because it is sometimes used as a form of punishment.”

It’s common for  people to say something like, “I need some alone time.” This is not to be found in a car ride by yourself. And the benefits are not likely to occur sitting by yourself in a park surrounded by others. 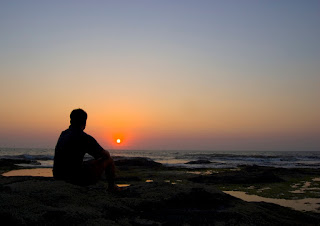 This time alone would better be described as getting away... to a cabin in the woods. My one-day internal discovery experience took place in a motel 30 miles outside of town. No computers. No television or mobile phone distractions. Just a quiet environment where hours can be spent in honest contemplation.

How often should this be done? I don’t think anyone has a definitive answer on this. When you determine that life has delivered you too many challenges and not enough down time, you should consider a short retreat. Emily Roberts, a psychotherapist quoted in the Times article, says “getting better at identifying moments when we need solitude to recharge and reflect can help us better handle negative emotions and experiences, like stress and burnout.” Good advice.

Too many “time outs” like this might send some yellow flag concerns to others. It could signal that you are having serious emotional difficulties when that might not be the case at all. Like I said, there’s no perfect program for solitude.

I’m convinced of this. Jesus of Nazareth found such alone time essential to His well being. Apparently He would be gone for hours—off by Himself. If the Creator of the universe found such breaks necessary (primarily for prayer), then it must have real value for the rest of us.

One final benefit. I find that after a short period of being alone, I’m refreshed enough in perspective to enjoy the company of others. I can even handle times with difficult people better!

So once in a while, take a break from the crowded life. Isolate and get to know yourself. There’s probably a LOT there to like.

That’s Forward Thinking. Click on the link to the right to connect via Facebook.
Enjoy the new Moving People Forward YouTube program and podcast at https://www.youtube.com/channel/UCosyuBzdSh1mXIas_kGY2Aw?view_as=subscriber and https://www.iheart.com/podcast/966-moving-people-forward-49183339/ respectively.
For more information:
https://www.nytimes.com/2019/10/28/smarter-living/the-benefits-of-being-alone.html
https://www.soulshepherding.org/jesus-solitude-and-silence/
Posted by Mark Elfstrand at 3:00 AM