Dancing with the … Devil?

It’s the time of year when we hear the big push for being thankful. We usually do so feasting over food and football. Oh, and giving gifts to ourselves as if we deserve early Christmas presents. Such is the modern day Christmas spirit.

We have a favorite local ministry that sends out annual requests for sharing holiday meals with the men and women whose lives have been filled with misfortune. A lot of it comes from their own doing. But, hey, I’ve done my share of bad decision making. So I gladly send a gift to help these hurting folks.

Truth is, this ministry truly is a ministry! What I mean is, from the start they have clearly outlined their purpose as a “Christian” ministry. They are serious enough about their love for God and for others to give their lives to caring for people. While they accept people as they are when arriving at their doors, the hope is that spiritual awakening will bring them new life.

Compassionate caring for others and accepting people does not mean accepting lifestyles that are contrary to biblical teaching. That would not be love. That would be license. So this ministry has parameters of behavior—as all solid ministries should.

Just like the Salvation Army should. And has. And is now paying the price.

Sadly, that price has come in the reduced contributions from a company that has long supported the ideals of ministries like the Salvation Army. And the Fellowship of Christian Athletes. And the Paul Anderson Youth Home. All three (and perhaps others like them) have lost important funding from Chick-fil-A in a recent realignment of their donation policies.

It seems like Chick-fil-A has made a decision to broaden their options (at minimum) for generous giving. The question remains, was that move actually in response to the ridiculous charge that the company is “anti-gay?” Liberal media hypes any protest or rejection of the brand from locating at an airport or college campus. The discerning mind clearly knows liberal thinking on “family.”

Can’t a privately held company have its own core values as it relates to supporting the traditional family structure and marriage? No. Not in the minds of the truly prejudicial gay radicals. They want total acceptance of THEIR values.

CNN recently published a column by author and writer Richard Morgan. Here’s what Morgan said, “[Chick-fil-A] didn't mention any shift in its views on homosexuality. [The new policy] would perhaps be more convincing if Dan Cathy, Chick-fil-A's CEO, acknowledged as wrong, and directly apologized for the comments that he made in 2012 about the company's belief and support of the ‘the biblical definition of the family unit.’”

Bottom line, Morgan charges Chick-fil-A with bigotry and homophobia even after the modified giving policies. And he doesn’t want Dan Cathy to eat more chicken. He wants him on his knees eating crow!

Go into ANY Chick-fil-A, and you will quickly discover a team of friendly, helpful people who don’t discriminate against anybody. Management is totally “tolerant” of others' beliefs. The term “bigot,” often applied by the Chick-fil-A haters, means “a person who is intolerant toward those holding different opinions.” Get it? That’s a description of people like Richard Morgan and his ilk.

The sad part of this story is that with Chick-fil-A’s new donation policy, many people of faith believe they’ve lost a corporate friend. The Bible-believing faith community feels betrayed. Perhaps unnecessarily. But it is what it is.

Here’s a hard lesson about business. Mess with your core customers and you begin a dance with the devil.

And that dance partner will eventually leave you on the floor all alone. 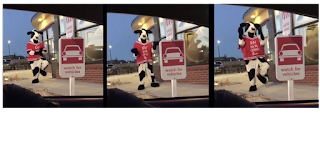 Enjoy the new Moving People Forward YouTube program and podcast at https://www.youtube.com/channel/UCosyuBzdSh1mXIas_kGY2Aw?view_as=subscriber and https://www.iheart.com/podcast/966-moving-people-forward-49183339/ respectively.
For more information:
https://www.christianheadlines.com/contributors/michael-foust/salvation-army-releases-statement-following-chick-fil-a-s-decision-to-halt-donations.html?utm_source=ChristianHeadlines%20Daily&utm_campaign=Trending%20Now%20-%20ChristianHeadlines.com&utm_medium=email&utm_content=2996584&bcid=af4b067cdb81aa9b5d82d181a9ccf571&recip=530696604%20
https://www.christianheadlines.com/contributors/michael-foust/salvation-army-releases-statement-following-chick-fil-a-s-decision-to-halt-donations.html?utm_source=ChristianHeadlines%20Daily&utm_campaign=Trending%20Now%20-%20ChristianHeadlines.com&utm_medium=email&utm_content=2996584&bcid=af4b067cdb81aa9b5d82d181a9ccf571&recip=530696604%20
Posted by Mark Elfstrand at 3:00 AM