An Oath for Truth

Today is Veterans Day. It’s become one of my favorite special days of the year. For a very long time, veterans were recognized and given appreciation on this day. More recently, a wide swath of restaurants and do-good businesses have jumped on the “honor the vet” bandwagon and give away stuff to past and present members of our armed forces.

I’m one of them. So my four glorious years in the Air Force continues to yield benefits. I’ll pick up my free haircut card after I get my free cup of coffee and my free favorite donut. Later there will be complimentary lunch and dinner at a couple of generous restaurants. Like I said, it’s a great time to be a veteran!

Those entering the military must take an oath. The oath for both enlistment and re-enlistment is the same. A superior officer administers the oath by first reading it and then the person being sworn repeating it. Here’s what is said: 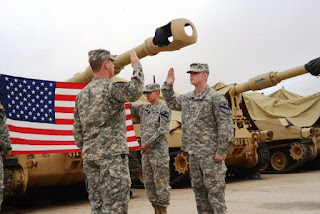 It’s well established that people holding positions of public office are asked to take an oath as well. This applies to federal, state, and many local government offices. Some of these require the oath be administered with a hand on the Bible, an idea some find unimportant or even offensive.

This causes me to wonder about those who proclaim a loyalty to Jesus. The ones who openly claim to be His followers. Would they be willing to take an oath? And if so, what would it say?

I pondered this as I read an article about a fast rising political candidate. A veteran of our US military. His name is Pete Buttigieg. You’ve likely heard of him.

If you see him today you could say, “Thank you for your service.” The mayor of South Bend, Indiana, spent six years as an intelligence officer in the Navy Reserves. He also commonly references a six-month deployment to Afghanistan. He’s in that post 9-11 group that volunteered to serve.

I was more interested to read the Christian Headlines article titled, 5 Things Christians Should Know about the Faith of Pete Buttigieg. Here we discover some interesting history about Pete. For example, he grew up and was baptized Catholic. The son of a former Jesuit, Buttigieg attended a Catholic high school. He admits that he didn’t truly understand his faith until he was a Rhodes Scholar at Oxford University. He wrote his 68-page undergraduate thesis on puritanism. Smart guy.

Today, Buttigieg is an Episcopalian. St. Augustine is one of his spiritual influencers. As for prayer, Pete says “…I do find that ritual organized prayer makes sense because it is a way to tune my own heart to what is right.”

All sounds well. Until the alarm bells go off. After his military deployment, Mayor Pete decided to embrace his homosexual leanings. One is almost tempted to be sympathetic to his yearnings as he claims, “…I was not interested in not knowing what it was like to be in love any longer.” And so, in June of 2018, the openly “gay” mayor hitched himself to another man—
Chasten.

What makes Pete Buttigieg a highly problematic candidate is his credible military history, political savvy, and the intangible gift of like-ability. Makes you want to cheer for him. Unless your better judgment about what is right and wrong informs you clearly that marriage is between a man and a woman. And that loving someone is a beautiful thing—until you take it beyond what God ever intended.

My view on truth seems to be losing ground in this age. But truth should never shift because of public opinion. Or because the deniers are “nice guys.” No matter how bright or savvy they might be.

In the meantime, no need to make an oath on a Bible you don’t really trust for truth.

For more information:
https://www.christianheadlines.com/contributors/mikaela-matthews/things-christians-should-know-about-the-faith-of-pete-buttigieg.html?utm_source=ChristianHeadlines%20Daily&utm_campaign=Trending%20Now%20-%20ChristianHeadlines.com&utm_medium=email&utm_content=2982439&bcid=af4b067cdb81aa9b5d82d181a9ccf571&recip=530696604%20
Posted by Mark Elfstrand at 4:50 AM