A Declaration of Life 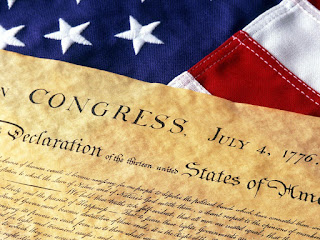 Yesterday, Americans offered up another celebration of what we call Independence Day. I doubt most of us have any recollection of the sequence of steps that led to the signing of the founding document known as the Declaration of Independence. But there was a process.

History records that on June 7, 1776, Richard Henry Lee introduced a motion in Congress to declare our national independence. Not everyone in Congress was ready to lock and load, believing that several colonies were unprepared. Nonetheless, a Congressional committee was formed to draft “a declaration of independence.” Thomas Jefferson was selected to lead this effort.

Once completed, Benjamin Franklin and John Adams reviewed the original draft, keeping it mostly intact. However, certain passages likely to meet with controversy or skepticism were struck. (In particular, these were passages which blamed King George III for the transatlantic slave trade and those that cast blame on the British people rather than their government.)

The final draft from the committee was presented before Congress on June 28, 1776. Next came the unanimous approval by Congress declaring our freedom from Great Britain. That occurred on July 2, 1776.

A group was then formed to draft a document explaining all this to the public. That took two more days. Again, Jefferson became the main author. Congress approved the actual Declaration of Independence document on July 4th. Off went the original to a printer named John Dunlap. About 200 copies of the Dunlap Broadside were made with that bold John Hancock signature at the bottom. Only 26 copies remain today.
On July 8, 1776, Colonel John Nixon of Philadelphia read a printed Declaration of Independence to the public for the first time. The reading took place in what is now known as Independence Square. A version of the Declaration was signed on August 2, 1776, in Philadelphia by many members of the Continental Congress. It’s interesting to note that historian Herbert Friedenwald determined that the signers on August 2nd weren’t necessarily the same delegates at the July gathering when the Declaration was originally proposed and approved.

The second sentence of the Declaration of Independence reads…
”We hold these truths to be self-evident, that all men are created equal, that they are endowed by their Creator with certain unalienable Rights, that among these are Life, Liberty and the pursuit of Happiness.”

Of course, it’s still troubling to try and understand how “all men are created equal” but not necessarily so in the late 1700s. At the time of the Constitutional Convention in 1787, delegate Roger Sherman of Connecticut proposed that congressional representation be based on the total number of inhabitants of a state. Delegate Charles Pinckney of South Carolina agreed but his support seemed disingenuous at best. He knew most blacks were enslaved in South Carolina and none, slave or free, could vote or were considered equals of white citizens of the state. Later in our history, it took the 19th Amendment for women to fully receive the right to vote.

And then there are the “unalienable Rights” (or inalienable if you prefer)—those that cannot be given away or taken away. Three are mentioned: Life, Liberty and the pursuit of Happiness. In America today, we still have adults who cannot figure out when a baby is “alive” and deserves to live. In a June press briefing, White House Press Secretary Jen Psaki refused to say if President Biden believes a 15-week-old unborn baby is a human being. So much for these millions of children who lost their “unalienable right to life.” Or liberty. Or happiness.

King David understood about being “endowed” by the Creator. He wrote, “For you created my inmost being; you knit me together in my mother’s womb. I praise you because I am fearfully and wonderfully made.” Psalm 139:13-14 (NIV) You can’t change that!

Until America gets the right to life right, let’s not ask God to bless our land.
That’s Forward Thinking. Click on the link to the right to connect via Facebook.
You can find a number of YouTube episodes and podcasts of Mark’s program, Moving People Forward at https://www.youtube.com/channel/UCosyuBzdSh1mXIas_kGY2Aw?
For more information on the Elfstrand Group, please visit www.elfstrandgroup.com
Articles of interest:
https://history.state.gov/milestones/1776-1783/declaration
https://constitutioncenter.org/interactive-constitution/blog/on-this-day-the-declaration-of-independence-is-officially-signed
Posted by Mark Elfstrand at 1:00 AM