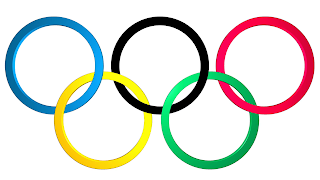 Let the games begin! Over the past three decades, I’ve collected several goodies from the promoters of the Olympics. I have enough return address labels from them to mail things into the next century. I have a vest with the Olympic rings, at least a couple of hats, and several items that were passed on to thrift stores.

Now some of that has come at a price. Most apparel items required a financial gift to support our Olympic athletes. Something I have generally wanted to do. I say “generally,” because I really have no interest in supporting athletes who use the platform to diss the country financing the show of their achievements. And there have been several.

The first to really stand out occurred in the 1968 games. It happened in the medal ceremony in Mexico City on October 16th. Tommie Smith and John Carlos, two African-American athletes on the US team, each raised a black-gloved fist during the playing of our national anthem. The two men were on the podium having won medals in the 200-meter running event of the games. Both turned and faced the US flag and then kept their hands raised until the anthem had finished. A third medalist from Australia joined Smith and Carlos in wearing human-rights badges on their jackets.

It was written 30 years later in Tommie Smith’s autobiography that the raised fists were not a “'Black Power' salute per se, but rather a ‘human rights’ salute.” But who knows. What they did, however, has been considered among one the most overtly political statements in the history of the modern Olympics.

Of greater political drama were the events of the 1972 Munich Olympics. Early on the morning of September 5th, a group of Palestinian terrorists ambushed the Israeli team and took nine hostages. Negotiations to free them broke down. The terrorists took the athletes to the Munich airport where German police fired on them from rooftops. Three were killed. A gun battle followed, killing the hostages, two more Palestinian terrorists, and a policeman. What a waste of lives!

There have been others who chose to use the Olympics as their platform for their preferred causes. Raising questions of her loyalty, for example, BMX Freestyle rider Chelsea Wolfe wrote on Facebook last year, “My goal is to win the Olympics so I can burn a US flag on the podium.” Chelsea “identifies” as a trans woman. Her issue was trans-related. Later she told Fox News, “One of the reasons why I work so hard to represent the United States in international competition is to show the world that this country has morals and values, that it's not all of the bad things that we're known for.” Oh please.

More recently we had the display of hammer thrower Gwen Berry. She decided to turn away from the American flag during the playing of the national anthem while at the US Olympic Trials. Gwen explained that she believed The Star Spangled Banner “does not speak for black Americans.”

Here’s the deal. A LOT of what has happened in American history doesn’t speak for ALL Americans. The Native population that was on the soil of this nation before most any other ethnic group has been violated. How about the taxes we pay? The first income tax in the US was levied in the Civil War, but the federal income tax as we know it was officially enacted in 1913. The estate tax, gift tax, and Social Security taxes all were legislated in the 1920s and 1930s. I’ve been “violated” all my life by those.

Worse yet, a huge number of my fellow countrymen and women (I love saying it that way) keep voting in people who choose to kill our babies through abortion! How UN-American!! Roe V Wade doesn’t speak for me!

But it’s still our country. Freer than almost any other. Better than most—if not the best. So if you’re on our Olympic teams, stop the showboating. And to the organizers, stop taking the rebels to the competition.

No financial contribution from me this year. I don’t care how many labels they send.
That’s Forward Thinking. Click on the link to the right to connect via Facebook.
You can find a number of YouTube episodes and podcasts of Mark’s program, Moving People Forward at https://www.youtube.com/channel/UCosyuBzdSh1mXIas_kGY2Aw?
For more information on the Elfstrand Group, please visit www.elfstrandgroup.com
Articles of interest:
https://www.history.com/this-day-in-history/massacre-begins-at-munich-olympics
https://www.foxnews.com/us/us-olympic-athlete-chelsea-wolfe-burn-flag-podium
https://www.christianheadlines.com/blog/us-olympic-hammer-thrower-gwen-berry-explains-why-she-turned-her-back-during-national-anthem.html?utm_source=ChristianHeadlines%20Daily&utm_campaign=Christian%20Headlines%20Daily%20-%20ChristianHeadlines.com&utm_medium=email&utm_content=5001749&recip=530696604
Posted by Mark Elfstrand at 1:00 AM