A Birthday Wish from George 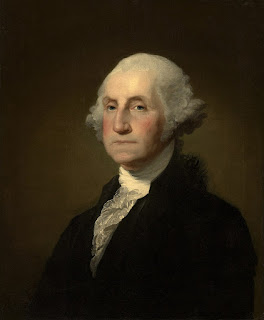 Today, of course, is George Washington’s real birthday. I always thought this American giant was a cool dude. Of course, if he could hear me say that he would have no idea what I meant. How special to be known as “the father of our country.”
George did not print that on his business cards. The moniker came about in several stages. Levi Allen, younger brother of Ethan Allen, wrote to the General in January of 1776, praising him as "Our political Father and head of a Great People.” Almost two years later in late 1777, Henry Knox told George that "the People of America look up to you as their Father, and into your hands they entrust their all.” Heady stuff.
It wasn’t like George loved the idea of being president. He received the news of his election win in the spring of 1789. He told his friend Knox,“My movements to the chair of Government will be accompanied with feelings not unlike those of a culprit who is going to the place of his execution.”
It’s one thing to be the commander of forces who follow your direct orders. It’s another to be the politician who was forced to deal with infighting between the two major parties of his day—the Federalists and the Democratic-Republicans. (Hmmm, can you imagine such a hyphenated party existing today?) It’s also been reported that Thomas Jefferson challenged much of what Washington wanted to do in a newspaper he (Jefferson) helped fund.
President Washington’s second term was especially challenging. He had to navigate relationships with France and Great Britain as they fought with each other and longed for his support. A treaty with the British barely slipped through the Senate but according to an official historian, it was “extremely unpopular with the American public.”
A particularly interesting article on the life of our first president was written by Richard Norton Smith more than 25 years ago. It’s titled, “The Surprising George Washington.” Smith writes, “On the last night of his life, having defied the might of the British empire and planted the seeds of republican government, the old hero was invited to challenge the very laws of nature.”
Apparently dear old George had developed a sore throat that turned out to be lethal. A practicing doctor friend, William Thornton, sped to Mount Vernon upon hearing the news to perform an emergency tracheotomy. He arrived too late, but refused to accept the death verdict.
Here is what Thornton proposed: “First to thaw him in cold water, then to lay him in blankets, and by degrees and by friction to give him warmth, and to put into activity the minute blood vessels, at the same time to open a passage to the lungs by the trachea, and to inflate them with air, to produce an artificial respiration, and to transfuse blood into him from a lamb.” This process would have doubtfully received approval from the AMA.
Abigail Adams said of George Washington,"He has a dignity which forbids familiarity, mixed with an easy affability, which creates love and reverence.” The first POTUS advised his nephew Bushrod, "Be courteous to all, intimate with few, for true friendship is a plant of slow growth.” Wise counsel.
Perhaps George gained this understanding by reading about Jesus of Nazareth. In all times, people seek to know the deeper aspects of a leader’s soul. Of Jesus it was written, “Because of the miraculous signs Jesus did in Jerusalem at the Passover celebration, many began to trust in him. But Jesus didn’t trust them, because he knew all about people. No one needed to tell him about human nature, for he knew what was in each person’s heart.” John 2:23-25 (NLT)
Washington left us this advice: "You do well to wish to learn our arts and ways of life, and above all, the religion of Jesus Christ. These will make you a greater and happier people than you are. Congress will do every thing they can to assist you in this wise intention.”
Wishful thinking, birthday boy!
That’s Forward Thinking. Click on the link to the right to connect via Facebook.
You can find a number of YouTube episodes and podcasts of Mark’s program, Moving People Forward at https://www.youtube.com/channel/UCosyuBzdSh1mXIas_kGY2Aw?
For more information on the Elfstrand Group, please visit www.elfstrandgroup.com
Articles of interest: