My Dog’s Better than Your Dog 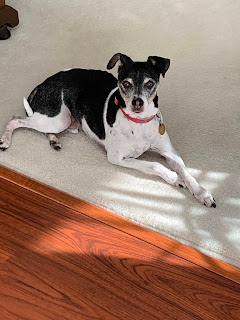 Within the last few weeks, former President Barack Obama was speaking in Singapore. He decided to wade into the waters of the significant political differences in America and how social media can and does help spread misinformation. Even those lies that heap coals on burning political fires.

The former leader of the free world then jumped the fence into which gender makes better leaders. Oh boy. The setting for his observations was appropriate being it was a private event on leadership.

His generalization was that a majority of the problems in our world stem from old people—mostly men—who hold positions of power. Barack revealed that while he was the president, he had mused what a world run by women would look like. So here are some results of his musings.

First he noted, “Now, women, I just want you to know, you are not perfect, but what I can say pretty indisputably is that you're better than us [men]. I'm absolutely confident that for two years if every nation on earth was run by women, you would see a significant improvement across the board on just about everything... living standards and outcomes.”

As one political observer noted, women as political leaders have not necessarily led to a significant improvement in outcomes. Germany’s Angela Merkel has been the country’s chancellor since 2005. Their economy has not always fared well, particularly in late 2012 and 2013.

In the United Kingdom, Theresa May found the going brutally tough at times. Parliament never did get behind her Brexit plan while she was in office. Finlanders have chosen a 34-year-old woman, Sanna Marin, who is leading a cabinet primarily served by women.

There’s hardly enough evidence to make the claim that Obama did—that “if every nation on earth was run by women, you would see a significant improvement across the board on just about everything... living standards and outcomes.” But such bold proclamations make for good political standing amongst the right crowd.

Pew Research has done quite a bit of study on women and men as leaders. In survey after survey, they discovered that few believe one gender has a better leadership approach that the other. However, leadership styles do differ. Women are perceived to be more compassionate, empathetic, and able to find compromise. Men are perceived as stronger in making bold moves and taking risks.

But why pit one against the other? Anyone with a family can see there are differences in the way women and men deal with decisions and relationships. When working together, strong families usually result. Gender personalities can be quite different.

So…would the former president ever re-engage in political leadership himself? Doesn’t seem like it. Mr. Obama said his belief is that leaders should step aside when their time of service has ended. In his words, "If you look at the world and look at the problems it's usually old people, usually old men, not getting out of the way. It is important for political leaders to try and remind themselves that you are there to do a job, but you are not there for life, you are not there in order to prop up your own sense of self importance or your own power.”

One can only imagine how his former Vice President, Joe Biden, perceived this message. Grandpa Joe is in quite a dog fight right now with both men and women. And what about Bernie? And Bloomberg?

And speaking of dog fights, pitting one gender against the other reminds me of a formerly well known dog food commercial. The brand had kids singing, “My dog’s better than your dog 'cause he eats Ken-L-Ration.” That’s a good way to start a fight among dog loving kids! (see YouTube link below for the commercial.)

The Bible offers this counsel. “Don’t be selfish; don’t try to impress others. Be humble, thinking of others as better than yourselves.” Philippians 2:3 (NLT)

This is really good advice. There is one exception. My dog actually IS better than yours. (See picture.)
That’s Forward Thinking. Click on the link to the right to connect via Facebook.
Enjoy the new Moving People Forward YouTube program and podcast at https://www.youtube.com/channel/UCosyuBzdSh1mXIas_kGY2Aw?view_as=subscriber and https://www.iheart.com/podcast/966-moving-people-forward-49183339/ respectively.
For more information:
https://www.bbc.com/news/world-asia-50805822
https://www.youtube.com/watch?v=Oi84maqHgxg
Posted by Mark Elfstrand at 3:00 AM