The New York Yankees are finished. At least for this year. Good.

Over the years, I’ve refined my distaste for the Yankees. I think it goes beyond that. Perhaps I disdain the attitude that seems to emerge from a fair share of folk from New York City.

I must confess that some of this has to do with my faithful fan status for the Minnesota Twins. As a young boy, I had the privilege of watching some of the Yankee greats from the 60s come to play the Twins. I saw Mickey Mantle, Roger Maris, Yogi Berra, Whitey Ford, and the true Christian gentleman, Bobby Richardson. The problem then was the same problem as now. Those darn Yankees kept beating up on my Twins. And, yes, they did it again in the first round of the American League (AL) playoffs this year!

In my early 20s, my short military career took me to Iceland where I was the sports director for American Forces Radio and Television. Part of my job was to select the one or two games each day during baseball season that we would air on our radio station in Keflavik. Who were my problem children? Those darn Yankee fans. They would call and leave messages bugging me to put the Yankees on every day—as if no other team mattered. To them, no other team probably did.

The ugly Yankee fan showed up big time in the recent AL Championship series against Houston. The Astros right field is Josh Reddick. Having been to Darn Yankee Stadium before, he was psyching himself up for the fan abuse he expected. He’s always handled the nasty verbal insults well. But last Tuesday night, fans were throwing objects at him in between innings. Reddick was infuriated.

Objects like what? Says Reddick “I think I saw seven or eight water bottles out in the outfield, and two souvenir baseballs thrown from center field to left…I don’t think a lot of people realize how scary that can really be. You throw a baseball hard enough, hit somebody in the head when we’re not looking, it can do some damage to you as a player.”

What was Reddick’s offense? He had hit a home run in the second inning. That earned the catcalling Darn Yankee fans chanting “You suck” for virtually the whole game. Josh added, “There’s a lot of expletives in there, but stuff I can’t repeat.’’ And Reddick says this has always been the case during his 12 year career when visiting Yankee stadium. Fans even Googled his family information to insult them!

Okay, to give some balance, there are millions of people in the state of New York who would never act so childishly and rudely. My son graduated college from a fine New York school in Rochester. His wonderful wife and family are sweet people from western New York. But those Yankee fans are another breed.

I think those diehards can’t stand losing. The thought of supporting an inferior ball club is crushing. So they lash out. It hurts their pride.

Is there such a thing as “healthy pride?” Counselor Lynn Namka writes, “Feeling proud of your children who have done well in an activity and are good, decent human beings is normal healthy pride. Healthy pride supports people and their growth. It is a reward for expending effort and a job well done.”

In New York City, we saw a powerful example of healthy pride after the destruction of the twin towers on 9-11. The encouragement and support for the emergency responders was overwhelming. Plus the inner strength to rebuild.

And make no mistake. Churches and pastors can be destroyed by the wrong kind of pride as well. Success in ministry can and has led to dangerous downfalls.

We should not be surprised. King Solomon wrote, “Pride goes before destruction, and a haughty spirit before a fall.” (Proverbs 16:18, ESV)

So my baseball soul now rests for another year. Except for those Yankee nightmares. 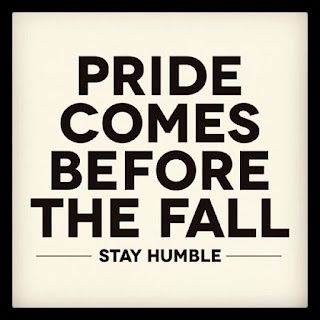