Of Wolves and Camels

(This blog of mine was originally published in January of 2014. I re-share today as I’m on vacation.)

I did not see the film The Wolf of Wall Street. Probably never will. I do admit to being fascinated by the intensity of the lifestyle of traders and financial players.

The film featured Leonardo DiCaprio playing the role of one bad and out-of-control banker, Jordan Belfort. It’s supposedly a true story, replete with the trappings that come with incredible wealth. We get a picture of the very ugly side of Belfort and his eventual fall involving crime and corruption. The feds took him down.

Early in my time in Chicago, a friend arranged a lunch for me with a trader after he gave us a tour of the Chicago Board of Trade. It was surprising how in that array of activity someone could focus and maintain sanity. Apparently the burn or burnout rate comes at a fairly young age.

Two recent New York Times stories gave me reasons to think about the passions and lessons learned from financial power brokers. Cliff Oxford wrote the article, “Entrepreneurial Lessons from the Wolf of Wall Street.” Quoting, “Two of them were: You can’t build a culture in a comfort zone, and there is a dark side in the drive to be first.” He added that the film shows “how you can take ordinary people and make them maniacs for the mission.” (Link below)

The second article gave quite a bit more depth to another wolf who has left the pack. It’s powerful. It’s titled “For the Love of Money” and is written by Sam Polk. (Link below)

Polk had an upbringing in a middle class home with a salesman father who dreamed of being rich. Sam did more than dream. After his time at Columbia University, which included significant drug use and suspension, he got himself a trading floor job. It started his rather meteoric rise to wealth. He next went to Bank of America and, four years later, he was offered a Citibank job at $1.75 million per year. Perks galore.

But his self-written story is about how there was never enough. He came to learn about envy. Greed. Power. The kinds of things that take a man down. Like Jordan Belfort.

But Sam Polk had an epiphany. And it came from his superior’s reaction to hedge fund regulations being implemented. As he challenged the assumption that these regulations were not necessarily bad, the responses he received showed almost unbelievable self interest. Almost.

Polk’s epiphany led him to serious self examination. And he acted on the dark sides of his life. He left the company. He experienced withdrawal symptoms of greed. His world today is vastly different as his testimony tells.

Sam Polk does not make a clear connection to any specific spiritual driving force. But reading his story, it reminded me of Jesus telling His audience that “it is easier for a camel to go through the eye of a needle than for a rich man to enter the Kingdom of God.” (Mark 10:25) Folks in Jesus’ time believed wealth was a sign of God’s blessing. How possibly could wealth be a barrier to God? We know better.

Here’s our challenge. Forget the amount of wealth involved. Our souls need to be constantly on guard against the destructive forces of envy, greed, the love of power, and pride. There are a few more as well, categorized over the years as “The Seven Deadly Sins.” Google that if you need help identifying them.

To avoid becoming a big bad wolf, discipline yourself to fight those sins as a camel would fight to get through the eye of a needle.

You’ll likely need a lot of prayer...to get over the hump. 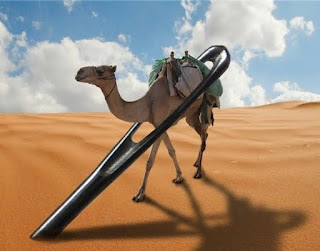