Using a business platform to be an advocate for good seems a most noble thing. It gets complicated when the advocacy is highly controversial. Even divisive. Even wrong.

The most casual observers of the news have witnessed what is happening in Hong Kong. The Chinese government is not particularly fond of pro-democracy reforms. Well, they are a Communist country after all.

Many who reside in Hong Kong likely remember the “good old days.” That was when the British ruled over that portion of China. That governance began in 1841 and lasted until 1941. After a brief occupation by Japan, Hong Kong returned to British rule until 1997.

I’ve visited the colony a few times in the 1990s. It was as seemingly capitalistic a place as you could get. And an amazing amount of wealth resided there. Along with greater freedoms. Beginning in the 1950s, the Chinese government frequently made threats towards any British attempts to advocate for democratic changes. But it seems the hunger for freedom among residents in Hong Kong persists.

In June of this year, protests began over plans that would have permitted extradition from Hong Kong to mainland China. Those protests have grown. Citizens are pushing for wider democratic reforms. And the mainland doesn’t like it.

So how does America interact on this issue? Two stories this week give us some insight. Wired Magazine reports this headline, “Hong Kong Is the Latest Tripwire for Tech Firms in China.” The subtitle explains, “Blizzard, Apple, and Google remove signs of support for pro-democracy protesters, in apparent concessions to the politics underlying the Chinese market.”

The story details how over the last ten years, a growing relationship has developed between high-tech products interested in US sports in China. Businesses in our country have been blessed by the wealth of many of these Asian consumers. But it’s bigger than that. Several of our high tech firms are dependent on factories and supply chains in China.

Comments cited in the Wired article include those of Chris Meserole. Chris is a foreign policy fellow and technology expert at the Brookings Institution in Washington. He notes, “I don’t think the public is aware of just how fully intertwined our economies are.” I’m sure he’s right, but who among us has not joked about how many things Americans own that are made in China.

One example of the capitulation of American business on this issue involves an app. This particular app aided protestors in tracking police movements. The same police who attempt to quell the protests sometimes using live ammunition. Apple pulled the app—claiming it was used to ambush law enforcement. This followed a bitterly critical article of Apple by a state run Chinese newspaper.

Then there’s the NBA. This is the place where players on a championship team refuse to accept an invitation to the White House because of politics. They understand a protest. But wait…also reported this week was a story about Houston Rockets General Manager Daryl Morley. He tweeted support for the Hong Kong freedom protestors! Then…he suddenly deleted his tweet. His NBA overseers said it was "regrettable" that the tweet was found to be offensive to the Chinese, and the Rockets said Morey's views did not represent those of the team. Sissies.

It’s well known that the Chinese government persecutes Christians. They shut down churches and forbid teaching of the faith to children. It’s the Communist way.


Jesus of Nazareth said to expect this. Freedom and faith go hand-in-hand.

In this country, we can protest and make our voice known without fear. Unless, of course, you decide to wish a college student a Happy Columbus Day. Now you’re asking for real trouble!

I think mean-spirited politics is becoming indigenous to our people. 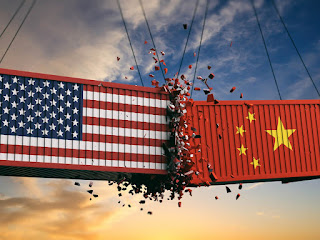