The 12 Scams of Christmas 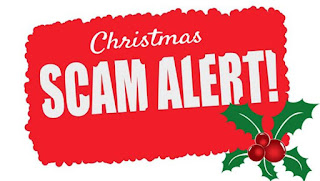 I suppose crazy stunts have always been with us. Maybe since the beginning of time. (Who was the first earthling to pull somebody’s chair out before they sat down?) People love to play practical jokes. Or jump on board to test the limits of risky behavior.
In my high school days, there was the “stuff the VW Beetle Challenge.” I’m sure that’s not the official title, but that was the objective. I never tried it.
But for the record — specifically the Guinness record — “The most people crammed into an old style VW Beetle is 20 and was achieved by the Asbury University Emancipation Project at the Lexington Rescue Mission in Lexington, Kentucky, on 9 December 2010.” A 1964 Beetle was used to draw attention to human trafficking.
So there you go. More recently, there was “gallon challenge” and the “cinnamon challenge.” And the famed “Tide Pod Challenge” by which you munch your way to a cleaner but possibly deadlier stomach. Well, okay, some were merely cooking them in frying pans, then chewing them up before spewing the soap from their mouths. Sheesh.
But 2021 might be remembered for the rise of the popular Milk Crate Challenge. How does this work, you may ask? Participants walk precariously up a pyramid of milk crates, step by step, inching closer to…? The end could be a claim to greatness or, quite possibly, a trip to a hospital emergency room.
According to the Washington Post, when the victim lands, “throngs of people who’ve helped make the social media spectacle known as the Milk Crate Challenge into the latest viral phenomenon, proceed to sing a chorus of ‘oh!’ and ‘ah!’ as the pyramid collapses and a person’s body painfully lands on a milk crate or the ground.” The dangerous act can then be viewed by millions.
While practical jokes and stunts like those above had their own risks and dangers, it usually only involves a very limited group. Not so with the more troubling scams of our time. And Christmas season seems to bring out the worst of them.
You’ve heard of the Twelve Days of Christmas? The Better Business Bureau has published the 12 Scams of Christmas to watch out for this season.
Some general counsel from the BBB explains that many scams of the holiday season come to you through emails and social media platforms. Especially social media. Look out for “ads about discounted items, event promotions, job opportunities, and donation requests, as well as direct messages from strangers.” Make no payment or donation by wire or e-transfer, through third parties. Ignore requests for prepaid debit or gift cards.
So here are several of the naughties on the BBB Christmas Scammers list;
Proverbs 21:6 warns, “The acquisition of treasures by a lying tongue is a fleeting vapor, the pursuit of death.” (NASB)
Need I say more?
(See the complete list and further details at: https://www.bbb.org/article/news-releases/23497-the-naughty-list-bbbs-12-scams-of-christmas.)
That’s Forward Thinking. Click on the link to the right to connect via Facebook.
You can find a number of YouTube episodes and podcasts of Mark’s program, Moving People Forward at https://www.youtube.com/channel/UCosyuBzdSh1mXIas_kGY2Aw?
For more information on the Elfstrand Group, please visit www.elfstrandgroup.com
Articles of interest:
https://www.washingtonpost.com/technology/2021/08/24/milk-crate-challenge/