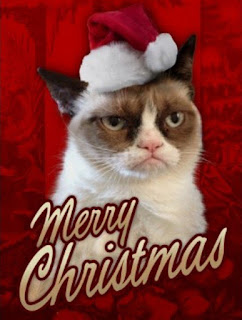 A really good headline should immediately draw you into a story. And so it was when breezing through my liberal-leaning Washington Post teasers I came across this: "Why I Hate Christmas." The hook was planted.

Brian Broome, the opinion writer of this piece, is the author of Punch Me Up to the Gods. To spare you searching, this book (according to a New York Times reviewer) “is a coming-of-age story that explores Black manhood and queerness in the Rust Belt." I won’t go further as that is not what the focus is of my blog.

Instead, it’s Broome’s distaste — even disgust—for what Andy Williams and a gaggle of others consider “the most wonderful time of the year.” So what is Broome’s problem? In a sentence, it’s that the Christmas season never lives up to the hype.

I can certainly sympathize with his irritation over commercials that sell a more blessed Christmas can be had with expensive jewelry or a new SUV. Only the blindest among us cannot discern that advertisers haven’t grasped the message of the Christ child. The satirist Stan Freberg hit the nail on the head when he composed his classic "Green Christmas” parody, which hit the radio waves in 1958.

Freberg had Scrooge heading up an ad agency. His team had found “innovative” ways to tie advertiser products into Christmas. Speaking up was Bob Cratchit, owner of a spice company. Bob’s firm intended to send Christmas cards with a simple message of "Peace on Earth, Good Will Toward Men." Scrooge would have none of that.

Admittedly, most advertisers today would reject that simple peace premise. Sending joy to the world is best tied into a Visa or MasterCard promotion. Amazon deliveries, we’re told, can bring joy as well.

Mr. Broome tells us that he came from a Christian family. He admits to recognizing the significance surrounding the birth of Christ. In fact, he actually played a camel in a church Christmas play one year.

But then…we hear the grudge factor. Gifts under the tree were necessities, such as a scarf, new mittens, or socks. And heaven forbid, as he writes, “the dreaded underpants.” (For the record, I’ve never received or chosen to give underwear to anyone at Christmas. It would be at the “bottom” of my list.) Apparently all the better gifts went to the more fortunate.

Broome even disses his family Christmas tree! Hear his grief as he sees it “glowing bright in the middle of the living room (as) a beacon to disappointment.” At this point, even Santa considered resigning!

This may seem a bit harsh, but Christians are part and parcel of the problem. Many of us among the so-call “faithful” jump into the shopping fray around (or before) Black Friday. We play lots of Christmas music that drifts far apart from the hymns that teach the theology of the coming Christ. Our kids are often led to believe that behavior earns them presents from the watchful eye of a jolly fictionalized guy.

In spite of these distortions, we don’t need to “hate” Christmas. We need to redeem the occasion as a celebration of hope and joy and peace. When the world sees more of that from Christ followers, maybe the things of earth will grow strangely dim.

The birth of Jesus arrived with a promise: “She will bear a son, and you shall call his name Jesus, for he will save his people from their sins.” Matthew 1:21 (ESV)

God bless us. Every one. And Merry Christmas!
That’s Forward Thinking. Click on the link to the right to connect via Facebook.
You can find a number of YouTube episodes and podcasts of Mark’s program, Moving People Forward at https://www.youtube.com/channel/UCosyuBzdSh1mXIas_kGY2Aw?
For more information on the Elfstrand Group, please visit www.elfstrandgroup.com
Articles of interest:
https://www.washingtonpost.com/opinions/2021/12/12/why-brian-broome-hates-christmas/
Posted by Mark Elfstrand at 1:00 AM