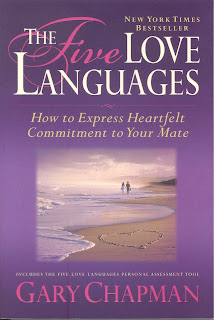 I chuckled a bit when I saw this headline in Christianity Today: "Gary Chapman Doesn’t Know He’s Famous." There are possibly a few well known Gary Chapmans. There was the one who was married to Amy Grant. A few who have been arrested or served prison time. But if you simply do a Google search on that name, the New York Times bestselling author of The Five Love Languages—THAT Gary Chapman— is about all you see.

In the world of authors, I’m pleased to say I’ve had the joy of knowing several bestselling writers. There’s Kevin Leman who has made quite a living off of finding common birth order traits. There’s Jerry Jenkins who, along with Tim LaHaye, developed and wrote the immensely popular Left Behind series.

When I say these authors are successful, I mean mega-successful. Gary Chapman’s books have sold in the millions. The same for Jerry Jenkins. Kevin Leman must be up pretty high as well.

I’m a published author myself. A book I wrote for men sold just over 5,000 copies. I was thrilled. At print time, I had no delusions of grandeur.

Most self-published authors, it’s reported, will sell around 250 books or fewer. A Huffington Post article a while back claimed that a book selling 25,000 copies is described as “sensational.” So, yeah, Jenkins and Chapman are in the sales stratosphere.

According to the CT article, The Five Love Languages sold 8,500 copies its first year. Twice that amount the next year. By year four, it sold 137,000 copies. Thirty years later, Gary’s writing on love languages has sold more than 20 million copies worldwide!

How remarkable is this? CT reports, “Only six other evangelical books have reached the 10 million mark, including Rick Warren’s The Purpose Driven Life (30 million), Sarah Young’s Jesus Calling, and Bruce Wilkinson’s The Prayer of Jabez.” Wow.

And yet, Sir Chapman doesn’t know he’s famous. He’s been on network television. On Oprah. Written up in papers like the Wall Street Journal and the New York Times.

I’ve been with Gary Chapman on several occasions. He’s as comfortable to speak with as your best friend. So what does it take to avoid the natural pride that accompanies great success? A true, honest sense of humility. And where does Gary Chapman find that? In the person of Jesus Christ.

The apostle Paul was on his journey to fame. But God radically changed his game plan. And in doing so, Paul learned to embrace humility. And here’s how he instructs true people of faith to live:
“In your lives you must think and act like Christ Jesus. Christ himself was like God in everything. But he did not think that being equal with God was something to be used for his own benefit. But he gave up his place with God and made himself nothing. He was born as a man and became like a servant.And when he was living as a man, he humbled himself and was fully obedient to God, even when that caused his death—death on a cross. So God raised him to the highest place. God made his name greater than every other name…” Philippians 2:5-9 (NCV)

I believe this is what keeps Dr. Gary Chapman centered. He told the CT reporter, “When I wrote the book, I wrote it intentionally with non-Christians in mind.” He chose a writing style that avoids “psychology or theology terms.” Instead, his instruction is “based on a universal concept: the need to be loved.”

You owe it to yourself to read the CT article on Gary Chapman. (Link below.) It explains in detail his roots and his devotion to his faith. Despite millions in book sales, he continues to serve as a pastor. It’s all about priorities.

A well known Southern Baptist missionary, Lottie Moon, left a grave stone message for all to read about being ‘faithful unto death.” Dr. Gary Chapman cited it in agreement saying, “God, that is what I want. ‘To be faithful unto death.’”

Could it be humility is God’s love language?
That’s Forward Thinking. Click on the link to the right to connect via Facebook.
You can find a number of YouTube episodes and podcasts of Mark’s program, Moving People Forward at https://www.youtube.com/channel/UCosyuBzdSh1mXIas_kGY2Aw?
For more information on the Elfstrand Group, please visit www.elfstrandgroup.com
Articles of interest:
https://www.christianitytoday.com/ct/2021/october/gary-chapman-secret-fame-five-love-languages.html
https://www.amazon.com/Chosen-Have-Called-You-Name/dp/1646070208
https://www.johnhuntpublishing.com/publishing-guide/chapter-4-more-proposal-detail/estimated-sales/
Posted by Mark Elfstrand at 1:00 AM