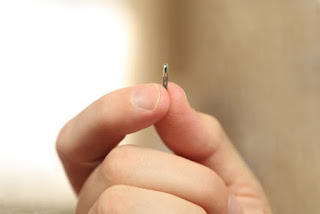 On March 27th, I joined the league of immunized Americans who have received the Pfizer Covid-19 vaccine. You can research what exactly the vaccine contains. Frankly, I’m not able to discern whether it should concern me or not. For now, I’m thankful for some protection from the nasty virus.

My cardiologist and my primary care doctor both advised getting immunized. Both my wife and I had some reservations. There has hardly been enough time to determine both the effectiveness and the possible consequences of getting the vaccine. But now, we’re both covered.

One thing of which I am quite confident. no one injected a microchip into my body. I know, many find that idea absurd. But not everybody.

In June of 2020, the one-time-possibly-then-crazy-minded candidate for US President—Kanye West—declared he had contracted the coronavirus. Here is what he said: “It’s so many of our children that are being vaccinated and paralyzed. So when they say the way we’re going to fix Covid is with a vaccine, I’m extremely cautious. That’s the mark of the beast. They want to put chips inside of us, they want to do all kinds of things, to make it where we can’t cross the gates of heaven.”

Hmmm. Kanye, please, lie down here on my couch.

Where would he get such an idea? From those who fear Bill Gates! Bill has all kinds of ideas on how to best save the planet. One of those involves tracking our health. So rumors began to spread that Bill supported the idea of having that done through implants under the skin.
Maybe Bill does like that idea. But Reuters news service apparently got from “the horse’s mouth” something different. They reported, “Bill Gates foresees the use of ‘digital certificates’ with health records, but did not say these would be in the form of microchip implants. There are no plans to use this future technology during the coronavirus outbreak.” Whew.

This is not to say we’re not heading that direction. In fact, the countrymen of my Swedish ancestry are already feeling “chippy.” In that country, some 4000 Swedes have adopted the technology with microchips inserted into their hands.

According to an NPR story, “The chips are designed to speed up users' daily routines and make their lives more convenient—accessing their homes, offices, and gyms is as easy as swiping their hands against digital readers…They also can be used to store emergency contact details, social media profiles, or e-tickets for events and rail journeys within Sweden.”

Call me a technophobe, but that sounds creepy. Invasive. None-of-your business kind of invasive. My dog doesn’t seem to care if you implant a chip in him, but Pepito isn’t concerned with identity theft.

And get this. Erik Frisk, who is a web developer and designer, uses the chip he had implanted in 2014 to unlock his office door. And when he moved into the house he began sharing with other roomies in 2018, Frisk organized a “chipping party” for the housemates. Yes, a chipping party! Perhaps one day you’ll be invited to a Pampered Chipper gathering!

I also admit to keeping a watchful eye on something I strongly believe to be true: the end game of that worrisome “mark of the beast.” In Revelation 13:16-17 we read. “It also forced all people, great and small, rich and poor, free and slave, to receive a mark on their right hands or on their foreheads, so that they could not buy or sell unless they had the mark, which is the name of the beast or the number of its name.” (NIV)

This Scripture may sound wacky, but you know a new national ID card was going to be required (or a passport) for air travel. And concerns over Covid-19 may also see airlines requiring you show your immunization card to fly. And what’s next? Just sayin’!

What…me worry? I’ve now received my two doses of the Covid vaccine. And I’ve not had any issues yet. Except for bizarre impulses to buy Microsoft products.
That’s Forward Thinking. Click on the link to the right to connect via Facebook.
You can find a number of YouTube episodes and podcasts of Mark’s program, Moving People Forward at https://www.youtube.com/channel/UCosyuBzdSh1mXIas_kGY2Aw?
For more information on the Elfstrand Group, please visit www.elfstrandgroup.com
Articles of interest:
https://www.npr.org/2018/10/22/658808705/thousands-of-swedes-are-inserting-microchips-under-their-skin
https://www.theguardian.com/technology/2019/nov/08/the-rise-of-microchipping-are-we-ready-for-technology-to-get-under-the-skin
Posted by Mark Elfstrand at 1:00 AM