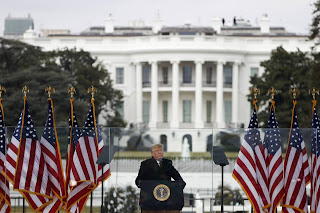 If sanity prevails, we will see another peaceful transition of power this coming week in the United States. While there are unsettling rumors of possible violence on Inauguration Day, a very heightened police presence should tame the threats of recent days. Let’s hope so.

The changing of the guard at the White House means massive transitions. Just vetting the incoming team means hundreds—even thousands—of people getting a very close look. And it is usually done at warp speed. Our national safety is always at risk as this occurs.

It’s often said that the presidency of the United States is the most powerful position in the world. Whether true or not, it is an immensely powerful role. I would think that would be hard to willingly give up. Yet it happens time and again. It is how our republic maintains some integrity.

Recently, Pew Research completed another of their polls on which man, living anywhere in the world, Americans admire most. The incumbent president usually rises to the top of the list because of the position and the visibility that accompanies being a world leader.

No doubt the top finisher came as a surprise to many. Frankly, my eyebrows raised a little. Shock on some faces.

President Donald Trump was listed as the most admired man in the United States for 2020, according to the Gallup survey that released December 29th. Former President Obama had captured that spot for the previous twelve years. This year, his star fell to second place.

Gallup has asked the open-ended most admired man question since 1946. The incumbent president has topped the list 60 times out of 74 queries. Unpopularity in polls usually signals a less favorable ranking. It did for Trump in previous surveys.

Another twist to the list is the frequency of top ten rankings. The Reverend Billy Graham finished among the top 10 a record 61 times during his life. He passed away in 2018. Former President Jimmy Carter has the most top 10 finishes of men alive today. Some 29 top tens put him behind Graham and Ronald Reagan for third all-time. He missed the cut this year.

As for Trump, how can a man who was impeached twice during his presidency possibly be rated as the man Americans admire most in the world? It all depends on your grading system. And how you evaluate leadership.

The outcomes of Trump’s four year tenure can only be properly measured in the future. Even then, the most bitter of his opponents will show little grace to the man. His most positive achievements will be challenged as damaging to our morally weak nation.

Here is a sure truth. “Every way of a man is right in his own eyes, but the LORD weighs the heart.” (Proverbs 21:2)

Donald Trump will face an accounting for his life before the Eternal Judge. So will Joe Biden. So will I. So will you.

Think you can make God’s “most admired” list? Think again. That’s why His Son had to die for you.

Be forever grateful. And be on guard for self-righteousness.
That’s Forward Thinking. Click on the link to the right to connect via Facebook.
You can find a number of YouTube episodes and podcasts of Mark’s program, Moving People Forward at https://www.youtube.com/channel/UCosyuBzdSh1mXIas_kGY2Aw?
For more information on the Elfstrand Group, please visit www.elfstrandgroup.com
Articles of interest:
https://news.gallup.com/poll/328193/donald-trump-michelle-obama-admired-2020.aspx
Posted by Mark Elfstrand at 1:00 AM