We’ve Fallen & Can’t Get Up 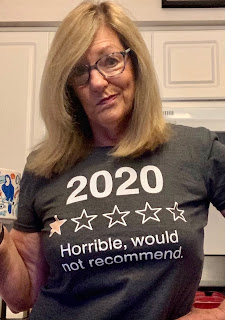 Tomorrow at 8:31 AM CDT, Fall begins. The greens of spring and summer will be steadily disappearing. Temperatures will begin their decline. Pumpkins will arrive at our neighbors' houses. And…we’ll have an election. Ugh.

My wife Rhonda recently purchased a new t-shirt with an Amazon-like one-star rating and the message: “2020: Horrible. Would not recommend.” The general opinion of my men’s 55+ group that met last Saturday left NO positive language on the table in descriptives for this year. Overall, I think Americans, en mass, believe that 2020 has been a loser. And this is before the election!

Restaurants in our area are simply, to use an odd expression, fed up. They’re tired of being told when they can open and when they must limit access. Their customer base has been drying up. Of course it has. And with colder weather coming, they pray that mandatory outdoor-only service will not return.

Lawry’s The Prime Rib in downtown Chicago has been delighting patrons from around the world for 46 years. They’ve just announced they’re closing at the end of the year. And they may never re-open in the city. Their lease is up, but that’s easily fixable. The other reason they gave for their decision isn’t so easily fixed: civil unrest—which has reared its ugly head multiple times over the summer months.

Several airlines have found 2020 to be the worst year in their existence. United recently threatened to furlough a mass of pilots and workers if the federal government didn’t come to their “rescue.” Many airline seats are vacant on the majority of flights domestically. And, frankly, what fun is it to be zooming around the country in a mask?

And speaking of zooming, should not “Zoom” be the word of the year? Like it used to be said of irresponsible sexual behavior, “everybody’s doin’ it.” School classrooms now meet via Zoom. So do business meetings and church gatherings. But at least you don’t have to wear a mask…usually.

Churches are changing. I just read that a sizable Baptist church in Tennessee is re-thinking their entire program of ministry. They might even hire a full time pastor who serves only Internet-based meetings of the church. And they’re developing small groups and fellowships in states 2000 miles away! Many churches are not making their pre-COVID-19 budgets.

Oh. And then there’s the political season we’re facing. One that just got more complicated with the passing of a Supreme Court justice. What will the process of replacement be like in the future now that we know to bring spirited accusers to destroy the credibility of the candidate—whether truth is told or not. Some honor!

And about that upcoming election. Threats have been made of violence unless a certain candidate wins. Mail in ballots, the hot item of 2020, will no doubt delay final results into 2021. Just in case you thought relief was coming.

We mustn’t forget the west coast fires destroying millions of acres of trees and leaving many people desperate for recovery. The same for victims of hurricanes and flooding. Their challenges abound.

And then there’s that nagging virus—about to get even more complicated by something called "the flu.”

If I didn’t know better, I’d be depressed! But I do know better. I know these aren’t the worst of times. Or the worst of circumstances. I know there’s a better world to come. Jesus promised it. Revelation 21:4 reads, “He will wipe away every tear from their eyes, and death shall be no more, neither shall there be mourning, nor crying, nor pain anymore, for the former things have passed away.” (ESV) Christ followers have that promise for their future.

Until that day, we must realize we live in a fallen world. And unless the hearts of Americans seriously change, I’m not so confident we’ll get up again.
That’s Forward Thinking. Click on the link to the right to connect via Facebook.
You can find a number of YouTube episodes and podcasts of Mark’s program, Moving People Forward at https://www.youtube.com/channel/UCosyuBzdSh1mXIas_kGY2Aw?
For more information on the Elfstrand Group, please visit www.elfstrandgroup.com
Posted by Mark Elfstrand at 8:24 AM