Survivalism of the Fittest

Who among us has not seen some television commercial or paid short program hawking survivalist kits? The kits can be either basic or elaborate. Frankly, the majority of us do not invest in these. Maybe we should start.

We are on the verge of a unique kind of survivalist paranoia. And it is striking deep into the mindset of Americans. In fact, it’s EVERYWHERE. It’s built from a foundation of fear over COVID-19. The Great Virus Scare of 2020.

Make no mistake. I choose neither to underestimate the significance of this pandemic nor to increase the amount of paranoia that stems from it. My observations are only built on the shutting down of most forms of business and social life occurring in our land (specifically the US).

While Wikipedia is not always the most reliable source for information, their definition of “survivalism” is as follows:


Survivalism is a movement of individuals or groups (called survivalists or preppers) who actively prepare for emergencies, including possible disruptions in social or political order, on scales from local to international. Survivalism also encompasses preparation for personal emergencies, such as job loss or being stranded in the wild or under adverse weather conditions. The emphasis is on self-reliance, stockpiling supplies, and gaining survival knowledge and skills. Survivalists often acquire emergency medical and self-defense training, stockpile food and water, prepare to become self-sufficient, and build structures such as survival retreats or underground shelters that may help them survive a catastrophe.

As for the rest of the world, Australia has been taking it on the bum. As the BBC reported, "Police were even called to a dispute on Wednesday, with reports saying a knife was pulled out in an argument over toilet roll between panic buying shoppers. On social media, #toiletpapergate and #toiletpapercrisis were top trending on (last) Wednesday. Rolls were being flogged for hundreds of dollars online, while listeners were calling into radio stations to win packs of 3-ply loo roll.”

Similar antics were seen in places affected worse by the virus. Places like Singapore, Japan, and Hong Kong. In fact, in February armed robbers confiscated pallets of TP in Hong Kong after shortages resulted from panic buying.

And right here at home, a nurse in my doctor's office told me she went to Sam’s Club and the toilet paper shelf was wiped clean! One of my coworkers discovered the same problem at Walmart. And Target just sent out an email saying, in essence, they were going to have to ration various “essentials” because of the gobbling-up crowd.

What causes this mania? According to Associate Professor Nikita Garg from the University of New South Wales, it’s FOMO syndrome. You know, Fear of Missing Out. She explained to the BBC, people "think if this person is buying it, if my neighbor is buying, there's got to be a reason and I need to get in too.”

Panic buying is truly driven by FOMO. Right now, the reality of a pandemic has fueled that fear. But if you want to be a true “prepper” in a time of crisis, I’d recommend you think a whole lot more of spiritual preparation.

The Bible predicts a day is coming when seemingly all hell breaks loose on this earth. As it is written, “This will be the worst time of suffering since the beginning of the world, and nothing this terrible will ever happen again. Matthew 24:21 (CEV)

Eternal survivalists will be those who prepared by putting their faith in God. It will be a person’s only hope.

I suggest you stock up on faith now.

That’s Forward Thinking. Click on the link to the right to connect via Facebook.
Enjoy the new Moving People Forward YouTube program and podcast at https://www.youtube.com/channel/UCosyuBzdSh1mXIas_kGY2Aw?view_as=subscriber and https://www.iheart.com/podcast/966-moving-people-forward-49183339/ respectively.
For more information:
https://www.bbc.com/news/world-australia-51731422 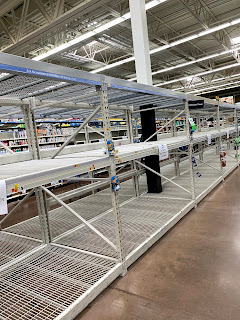