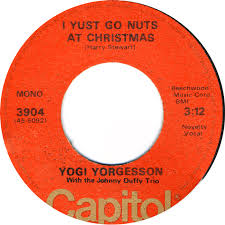 I have several favorite recorded Christmas oddities. Many of them showed up on the radio on my programs during the “holiday season” in years gone by. These are not from the camp of “Grandma Got Run Over by a Reindeer” or “Dominic the Donkey.”

Nah. Mine are much more refined silliness. For example, I still enjoy Stan Freberg’s classic, “Green Christmas” with the chorus, “Deck the halls with advertising.”

Then there's a Scandinavian favorite, “I Yust Go Nuts at Christmas” by the fictional Swede, Yogi Yorgesson. You can search the song title for the lyrics.

Another of my favorites came from the creative mind of Minnesota radio personality Chuck Knapp. He produced the little ditty, “Chipmunks Roasting O’er the Open Fire” replete with crackling fire effects. Lovely.

But on the more relevant side of tolerance and respect are the condensed comments by Ben Stein from a commentary he offered on the CBS Sunday Morning news program. The date was December 18, 2005, and the piece was titled “Confessions for the Holidays.” It’s publicly available. Here’s a good portion of it:

I don't think they are slighting me or getting ready to put me in a ghetto. In fact, I kind of like it. It shows that we are all brothers and sisters celebrating this happy time of year. It doesn't bother me at all that there is a manger scene on display at a key intersection near my beach house in Malibu. If people want a creche, it's just as fine with me as is the Menorah a few hundred yards away.

Every year, we get the same forces demanding that visible signs of Christmas be removed. For 2019, we can easily find such stories. One titled “The 72-Hour War Over Christmas” was featured in the New York Times on November 29th.

In short form, the mayor of Charleston, West Virginia, made a decision to rename the city’s annual Christmas parade to the “Charleston Winter Parade.” In her mind, she thought this would suggest that WVA’s capital city was a welcome place for people of all faiths and cultures.

As the Times reported, “Across America, the mention of ‘Christmas' in holiday greetings and decorations has become another measure of political divisiveness.” No kidding.

News of this created a swift backlash from the townspeople. And early on the third day following the mayor’s announcement she retreated. Mayor Amy Goodwin announced The Winter Parade was no more and the Christmas Parade was back. Morning talk show host Hoppy Kercheval reported to Mayor Amy, “Everybody is going to be happy again.”

Well I’m pretty sure not EVERYBODY is happy. The mayor did have her share of supporters. But she did learn the political lesson about the will of the people.

Truer words might never have been spoken. Merry Christmas, Yogi.

That’s Forward Thinking. Click on the link to the right to connect via Facebook.
Enjoy the new Moving People Forward YouTube program and podcast at https://www.youtube.com/channel/UCosyuBzdSh1mXIas_kGY2Aw?view_as=subscriber and https://www.iheart.com/podcast/966-moving-people-forward-49183339/ respectively.
For more information:
https://www.snopes.com/fact-check/confessions-for-the-holidays/
https://www.nytimes.com/2019/11/29/us/politics/christmas-parade-charlestonwv.html?nl=todaysheadlines&emc=edit_th_191129?campaign_id=2&instance_id=14107&segment_id=19180&user_id=af4b067cdb81aa9b5d82d181a9ccf571&regi_id=686180121129
Posted by Mark Elfstrand at 3:00 AM