The King of Comebacks

I decided long ago that I would not run for president. No doubt, many are relieved to hear this. My wife being one of them.

My decision was based on multiple factors. One being the intense scrutiny that even the most credible candidates face. Every past event that can smell like a personal failing or character flaw is brought to light.

Another reason is the sheer demand of time and energy it takes to live through a campaign. Presidential candidates are often speaking multiple times a day and in different cities. They’re either consuming massive quantities of Red Bull or have a stamina gene that average humans (like me) do not possess.

A third reason is that I’m not good at kissing babies. People say there is no such thing as an ugly baby. I believe those people have a very small exposure to the larger world. Admittedly, many humans who don’t look so great as infants mature into very normal looking people. (Like me.)

A fourth factor in my decision not to run is the impossible task of mastering seemingly every issue and addressing it intelligently. I’m known to be a competent public speaker. I’m good at answering questions on the spot. I am not so good at recovering from saying something I regret or that sounds stupid.

Recently, one of my former work associates at a past radio station announced he is running for president. Against Donald Trump. You say, fine—there are a bunch of Democrats doing that. No, wait. This chap is a REPUBLICAN.

In my exposure to this particular “candidate,” I’ve known him to say some pretty outlandish things. But hey, he’s a talk show host! No doubt I’ve said some things as a talk host that fit the same bill.

All candidates mess up. Even Barack Obama. He once said, “I’ve now been in 57 states. I think one left to go.” Or Sarah Palin who warned us that “Nuclear weaponry, of course, would be the be-all, end-all of just too many people on too many parts of our planet.”

Some slip ups reveal true character. Former presidential candidate John Edwards offered up this quote after cheating on his wife: “First of all, it happened during a period after she was in remission from cancer.” Oh…that explains it. Yuck.

Joe Biden seems to have mastered the gaffe. And he’s known for it. So much so that while stumping in New Hampshire recently he said, “I want to be clear: I’m not going nuts.” Well, that’s reassuring. He also forgot what state he was in at the time—referring to it as Vermont. Nutty.

Sometimes, even a president will say things he regrets. Or should. In his personal battle with Senator John McCain, President Trump offhandedly said, “I like people who weren't captured.” Obviously, this act of disdain towards the naval aviator who spent five years in a North Vietnamese prison camp and faced torture was highly insensitive—as any patriotic American could recognize.

My final reason for not running for president is I’m not real fond of criticism. I can take it, but sometimes I fail to hold back in dishing out an unkind verbal response. And I know better. The Bible teaches us this, “Losing your temper causes a lot of trouble, but staying calm settles arguments.” (Proverbs 15:8, CEV)

Jesus of Nazareth often confronted difficult questions from His critics with His own questions. That is actually a very wise way to step back from giving ammunition to those who are setting a trap for you. I don’t think current media would have liked Him.

But I do. Jesus was the King of comebacks. He put truth above all else. Still today, He loves us enough to call even the worst of sinners to account. 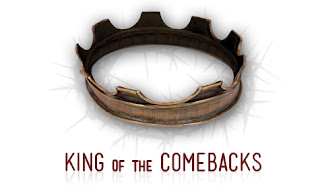