“Show me the money!” 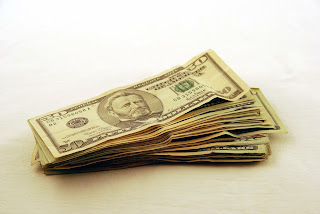 It was one of a handful of memorable lines from the movie Jerry McGuire—the romantic comedy that millions watched in theaters in 1996. The film starred Tom Cruise, Cuba Gooding Jr., and Renée Zellweger. Cruise played the role of sports agent Jerry McGuire. (The original screenplay was written for Tom Hanks!)

If you’ve not seen the film or have not watched it lately, Jerry finds himself out on his own after leaving a powerful sports agency. A client of his was a wide receiver named Rod Tidwell (Gooding). Rod is very unhappy with his current contract with the Arizona Cardinals. McGuire wants to keep representing him. Tidwell has the answer: "Show me the money!” He repeats it several times on the phone with McGuire and insists that Jerry scream it back at him. It’s a very funny exchange.

Interestingly, the film had the benefit of input from the man who inspired it: Leigh Steinberg. Anyone who follows sports knows Steinberg is one of the class acts in the sports agency business. He’s represented more than 300 professional athletes in football, baseball, basketball, boxing, and Olympic sports. Leigh served as a technical consultant for Jerry McGuire.

I have to wonder what Steinberg thought when he heard about the recent news involving Tony Bennett. Not the singer. The head basketball coach of the 2019 NCAA Basketball Champion Virginia Cavaliers.

A nice piece in the Washington Times recently tells the story. Award winning columnist Deron Snyder wrote that Bennett “knowingly violated his association’s unwritten rules, the unspoken agreement that members will always prime the pump for the members coming behind.” Get this. Bennett turned down a pay raise!


For those struggling to make ends meet, you need not feel too sorry for Tony. It’s reported that Coach Bennett netted around $4.15 million last season. This included a $1 million “longevity payment.” According to Snyder’s story, “The Daily Progress reports that his (Bennett’s) annual base salary was $500,000 in 2017, with the remainder of compensation paid for by sponsors and donors.” How gracious.

It was also noted that the famous Duke coach, Mike Krzyzewski, enjoyed a huge salary spike from $4.1 million in 2011 to $8.9 million in 2018. Alabama’s super-duper football coach, Nick Saban, went from $4 million in 2007 to $8.7 million this year. So you can see why there is shock and awe when a coach who wins a national championship says, “no más.” At least for now.

But why do such a thing? Here were Tony’s words from a news release. “'[My wife] Lauren and I are in a great spot, and in the past I’ve had increases in my contract.' He added, 'We just feel a great peace about where we’re at, all that’s taken place, and how we feel about this athletic department and this community and this school. I love being at UVA.'”

And if that notion of contentment being shared wasn’t enough, Tony piled on a little more generosity. By offering to share the wealth with others! He said, “… I have more than enough, and if there are ways that this can help out the athletic department, the other programs and coaches, by not tying up so much [in men’s basketball], that’s my desire.”

What kind a man is this?! Well, after his team won the championship, the coach said during a press conference, “…I know I have…in the love of my family–unconditional acceptance and love. That's huge. And I know I have that in my faith in Christ. That's, for me, where I draw my strength from – my peace, my steadiness in the midst of things.”

This mindset is one that the movie character Rod Tidwell might never understand. Money does not buy contentment. And quite often, more money only buys more problems.

Tony Bennett has discovered there’s a God who can fill the hole in one’s spiritual heart. He can bring peace…in times of turmoil. He alone is the answer to our deepest longings.

Tony might even say it this way. “God…YOU complete me.”

Enjoy the new Moving People Forward YouTube program and podcast at https://www.youtube.com/channel/UCosyuBzdSh1mXIas_kGY2Aw?view_as=subscriber and https://www.iheart.com/podcast/966-moving-people-forward-49183339/ respectively.
For more information:
https://www.washingtontimes.com/news/2019/sep/16/tony-bennett-giveback-rare-coaching-industry/
https://www.christianheadlines.com/contributors/michael-foust/faith-in-christ-is-virginia-coach-tony-bennett-s-secret-to-contentment.html
Posted by Mark Elfstrand at 3:00 AM