My wife Rhonda and I recently put another 2200 miles on the family car. This was for the round trip journey to Sidney, Montana, for my 50th high school reunion. Along the way—coming and going—we spent a lot of time listening to a Sirius XM’s recently added channel called, “Road Trip Radio.” I guess they're going to add this to their regular lineup.

The music mix is certainly eclectic. Everything from Johnny Cash singing “I’ve Been Everywhere” to songs by Elvis to the Doobie Brothers to a few more modern cuts. A lot of the music came from the 60s and 70s.

One of the songs we heard along the way was the rock tune, “Who are You?” by, somewhat ironically, The Who. It was the title track on their 1978 album and was the theme song for CSI: Crime Scene Investigation. (Unfortunately, the unedited version contains two obscenities.)

There’s a story line behind the song that you can find easily enough online. But the overriding lyric throughout is, “Who are you? I really wanna know Who are you?”—repeated ad infinitum. It’s quite catchy. And I had that in mind as I probed the stories that came out of my return to Sidney, Montana.

The reunion itself was a good experience for me. Several people who were unable to be at our 40th gathering showed up this time. Of those, I reconnected with a few from my speech club days. And I was able to return a copy of a girl’s annual from our junior year, which I had meant to sign but never returned. We had some laughs in the ceremonial presentation of giving it back.

Many choose not to attend reunions. In later years, I suppose this plays out because of health-related challenges, travel costs, or other difficulties. Twenty- and thirty-year reunions might conflict with business or family commitments as they are usually held in summer.

The more curious absences are those who live in the same community but don’t show up. I’d be interested to know why. Conversing about this with a friend, we concluded reasons could be many, but a few stood out. One, plainly there’s no interest. Secondly, these are usually highly social events. We had no dance or other distraction, so any activity meant you were talking to people, getting updates, and sharing stories. I can see where a good number of people would be uncomfortable if they have social difficulties. Another reason might be that the high school years were an unmemorable or unpleasant time.

A fourth reason stood out to me a bit more. Reunions are also about hearing what happened to people along life’s journey. Who they became. What challenges they overcame. The disappointments they had to face. Dreams unfulfilled. Marriages that didn’t last. Maybe some behavior that was embarrassing and wanted to be left in the past.

I’m sure a lot of those stories were left untold at the reunion. The truths that lie behind them, however, have left their mark. And so the masks we wore for the reunion were generally the best faces we could put on.

This is what separates real and artificial friendships. Real friends get real. Blemishes don’t matter. The person you are with has value beyond any mistakes or hurts. You love them in a deep and special way. And some of those kinds of friendships can date back to high school.

A reunion can rekindle a bit of that relational bond in memory form. Thus, there are treasures waiting. I certainly felt that way.

Proverbs 18:24 states, “There are ‘friends’ who destroy each other, but a real friend sticks closer than a brother.” (NLT)

I don’t know what kind of friend you are. But that’s the kind we ought to be. It’s the kind that plucks out the bad and tosses it away.

So exactly, who are you?

Watch for a new YouTube program and podcast with Mark Elfstrand beginning in late summer.
For more information:
https://en.wikipedia.org/wiki/Who_Are_You_(The_Who_song) 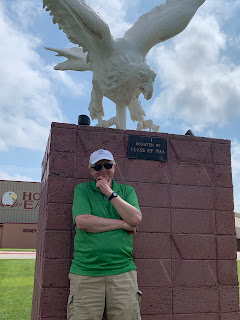