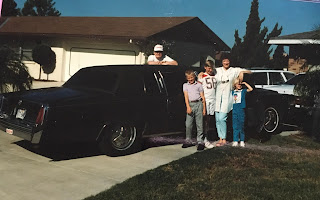 Today marks the 58th anniversary of the assassination of President John F. Kennedy. I not only remember where I was when the news reported the event (7th grade music class), I recall exactly where I was at the moment 25 years later where the crime unfolded.

We had just wrapped up worship time at First Baptist Church Dallas. It was just a few minutes past noon when we rounded the same corner onto Elm Street heading to Dealey Plaza. As always, there were people gathered in the area onto which the Texas Book Depository had its overlook.

I drove down the middle lane—the same as the Kennedy motorcade did on the fateful 1963 day. Even more ironic, we were owners of an older, used, formal limousine, which I was driving. (See picture) It was all too surreal.

In the years since that tragedy, we have learned that John Kennedy had weaknesses. Like all of us. The Camelot king liked women and did not set proper boundaries. despite having a beautiful wife.

He also had enemies. In fact, some thought the only reason he picked LBJ to be his Vice President was to move him out of a powerful Senate position. Apparently, Kennedy had much bigger enemies. At least one who knew how to shoot a 6.5×52mm Carcano Model 38 infantry carbine rapidly and accurately. That is, if we all believe it was Lee Harvey Oswald.

Many believe Kennedy was very popular. At certain points, yes, but political mistakes and misfortune cost him. The Bay of Pigs fiasco gave him a short ratings bound upward. However, by September of 1963 Kennedy’s approval rating had dropped to the mid-50s. These fall numbers became the lowest of his presidency.

Compare that to the recent numbers of our current president, Joe Biden. A Suffolk University/USA Today poll published on November 8th revealed that 46% of those surveyed believed President Biden has done a worse job than they expected.

Nearly two-thirds of Americans, 64%, say don't want Biden to run for a second term in 2024—including 28% of Democrats. And Vice President Kamala Harris' approval rating is 28%—even worse than President Biden’s.

Perhaps the greatest concern of Americans can be explained by the former White House doctor during President Obama’s term. That would be a current Texas Congressman, Ronny Jackson. He’s been vocal in his concerns over Biden’s mental competency.

When Jackson appeared on a podcast with Congressman Jim Banks of Indiana, he shared his belief that President Joe Biden is not fit to serve as commander in chief. This was not the first time he said this. And Jackson stated emphatically, “I know what that job entails, both physically and mentally, and how demanding it is. And I can tell you right now, I’m 100 percent sure that Joe Biden is incapable of doing that job.”

Perhaps we should also be concerned with the response from the former President. After Barack Obama heard what Jackson said, the Congressman received a “scathing” email from the former president. Jackson claims Obama said the comments about Biden’s cognitive health were a “betrayal of the trust that he and his administration had put in me.”

Must we prop up people who have significant competence issues? We must—if politics rules our ethics. Loyalty must only go so far.

The trouble is, others see the Biden problem as well. One YouTube video offers to teach people how to speak “Bidenese”—a form of gibberish pulled from his speeches. A Sky News Australia host, Rita Panahi, jokingly dubbed one of her segments “What in God’s name is Joe Biden trying to say?”

It’s not wrong to be critical of a president—or any leader—unless that criticism is patently offensive. Such is the case with the “Let’s Go Brandon” marketing items that really are sending President Biden a foul-mouthed message. Bad form.

No matter how good the leader is—even if he or she is perfect—there are critics. Even haters. Look at Jesus of Nazareth. The “whole world” was beginning to follow Him. A great teacher. A healer. A forgiver of true “sinners.” And look what they did to Him!

A truly good and wise leader needs to recognize when to give it up. And that’s before he or she becomes a national laughing-stock. One does that out of the greater good and love for their country.

As it says in Proverbs, “A nation will fall if it has no guidance. Many advisers mean security.” Proverbs 11:14 (GNT)
That’s Forward Thinking. Click on the link to the right to connect via Facebook.
You can find a number of YouTube episodes and podcasts of Mark’s program, Moving People Forward at https://www.youtube.com/channel/UCosyuBzdSh1mXIas_kGY2Aw?
For more information on the Elfstrand Group, please visit www.elfstrandgroup.com
Articles of interest: