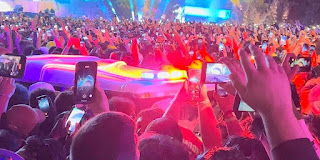 It must have been a horrific experience. Some 50,000 people jammed together for a concert in Houston. Eight never made it out.

By now, I trust you have read the accounts of the deadly Travis Scott event called Astroworld held just over a weekend ago. It seemed a bit more real to us in Chicagoland since two of the victims were from Illinois. One of them graduated high school just a few miles from my home. Perhaps I passed him sometime at a store. Or sat in the same movie theater.

What’s surprising is perhaps that we are surprised at the outcome. In a Washington Post article titled, “Astroworld concertgoers struggle to make sense of what happened,” we learn how Travis Scott events attract a certain risk-oriented concert-goer. Note this:

“Hathim Khan and his friends had been looking forward to Travis Scott and his Astroworld Festival for more than two years.They wanted to experience the raucous atmosphere and “raging” mosh pits that Scott’s shows were famous for…’I wanted to lose my voice,’ said Khan, 21." He had flown to Houston with friends from Orlando for Scott’s concert.

Said a 22-year-old friend, Jesse Marcano, “I was ready to break a leg.” And Khan replied, “If I broke a leg, it was going to be a good thing.” Chiming in was Liselle Sanchez, 21. “Yeah, we would have made Travis proud.”

In a later story from WaPo, we read the testimony of Cynthia Lira. This 20-year-old woman was knocked to the ground during the concert and thought she would die. In the crush of people, under “a strata of bodies, everything sounded muffled to Cynthia—as though she were in an underground tunnel. The only color she saw was darkness.”

She would later compare this experience to being in a “sinkhole.” Several seconds before, she heard Travis Scott tell the crowd to “move side-to-side.” She instantly knew what was next: a massive wave would topple her. Sound like fun? Sounds like terror.

Instead, Cynthia claims a calm realization came over her—the reality that as a 20-tear-old, she could possibly die right there, crushed at a concert in Houston. Cynthia lost consciousness, and everything went black. By God’s grace, she has lived to fight another day.

Another boy who died was a mere 14. He also was a fan of rapper Travis Scott.

Okay, I admit. I don’t get it. I’ve never really been much of a concert goer. My first was a Peter, Paul, and Mary event when I was in 8th grade. That was at McCormick Place in Chicago. As you might expect, the crowd was civil. The trio faced a much bigger and boisterous crowd at the Peace March in Washington, DC, in 1971.

I would later attend an Ike & Tina Turner Revue concert in Seattle in 1970. Once the lights went dark in the auditorium, a gush of folks rushed forward for better seats. If anyone died at that event it’s because they ingested something they shouldn’t have.

Crowds tend to scare me. Because I know people. If self-interest in any form is at stake, people act out of impulse.

I guess I’m more perturbed about the fascination and dedication to “artists” like Travis Scott. I’m sad that the 14-year-old who died – and the many others in his age group – find the lyrics of Scott appealing. Beauty is not to be found in this rapper’s songs.

Most churches don’t have to worry about big crowds. Except for hyped special events. And, there too, the crowds can get ugly.

Jesus of Nazareth faced crowds everywhere in His day. I’m sure there were instances of unruly behavior. Hero worship does that to us.
On one occasion, Jesus had an enormous crowd. At least 5000 men plus women and children. It’s recorded, “Then he ordered the crowds to sit down on the grass, and taking the five loaves and the two fish, he looked up to heaven and said a blessing. Then he broke the loaves and gave them to the disciples, and the disciples gave them to the crowds.” Matthew 14:19 (ESV)

That’s Jesus. Giving us food for the body. And leaving our souls satisfied.

Travis Scott left a crowd dazed. And confused. A crushing reality that also left eight dead in its wake.
That’s Forward Thinking. Click on the link to the right to connect via Facebook.
You can find a number of YouTube episodes and podcasts of Mark’s program, Moving People Forward at https://www.youtube.com/channel/UCosyuBzdSh1mXIas_kGY2Aw?
For more information on the Elfstrand Group, please visit www.elfstrandgroup.com
Articles of interest:
https://www.washingtonpost.com/nation/2021/11/07/astroworld-victims/
https://www.westernjournal.com/horrifying-scene-deadly-concert-video-shows-crowd-begging-rapper-stop-continues-singing-amid-chaos/?utm_source=email&utm_medium=AE&utm_campaign=can&utm_content=2021-11-07
https://www.washingtonpost.com/nation/2021/11/11/astroworld-survivor/?utm_campaign=wp_post_most&utm_medium=email&utm_source=newsletter&wpisrc=nl_most&carta-url=https%3A%2F%2Fs2.washingtonpost.com%2Fcar-ln-tr%2F354244a%2F618d50409d2fdab56b84f48f%2F596a91f7ade4e20ee3737115%2F42%2F72%2F618d50409d2fdab56b84f48f
Posted by Mark Elfstrand at 1:00 AM