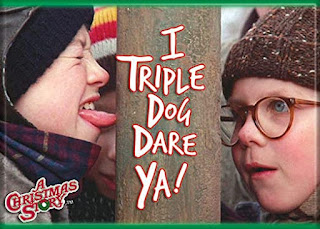 Most of the “average” Americans I know have watched the Christmas classic movies. You know, like It’s a Wonderful Life, White Christmas, and Holiday Inn. I’ve seen none of those. (Please try not to lose respect for me.)

And until Friday evening, neither my wife nor I had watched the popular holiday season film, A Christmas Story. This will likely come as surprising news to one of my best friends, whose son was a star performer in the Broadway production of that show a few years ago. He played Ralphie.

The film debuted in 1983, which explains why bad language shows up in numerous scenes. There was certainly a “Christmas” theme, but was packaged around the secular aspects of celebrating. It is now considered a seasonal “classic,” although I would not likely watch it repeatedly, nor share it with younger minds.

There are several humorous aspects to A Christmas Story. The one most central to the film’s main character (Ralphie) in that he wants a particular kind of gun for Christmas and is repeatedly told “no”—because he would “shoot his eye out.” Yes, that was a common refrain from parents in the era where guns that actually shoot various pellets or plastic bullets were found under many a Christmas tree. Today I’m not sure if fake weaponry is allowed on any kid’s list! Except in video games where real looking characters actually get knocked off amidst LOTS of violence.

What warmed my soul, however, was a scene where Ralphie and several friends were looking into the big picture window at Higbee’s department store. Inside were all kinds of toys and decorations with electric trains, stuffed animals, and…the aforementioned highly desired attack weapon, a Red Ryder Carbine Action 200-shot Range Model air rifle! (Don’t worry, there’s no spoiler alert here.)
Growing up in my very young years in Seattle and later Minneapolis, department stores were real life Higbee’s at Christmas time. I learned from A Christmas Story website that “Higbee’s was the first department store in the greater Cleveland area. The 12-floor Higbee Company building was the anchor for Cleveland’s Public Square from its open in 1931 until its eventual close on Monday, January 7, 2002.”

In my youthful years, Dayton’s department store in downtown Minneapolis was the go-to place at Christmas. Windows around the block were beautifully decorated. And on the 8th floor of the old Dayton’s multi-story building, was the “Christmas Show.” It was once considered “the most magical place in the Twin Cities.” The politically correct crowd got the name changed to “The Holiday Show.”

From the beginning, the Holiday Show had a different theme every year. Earlier themes included The Grinch, Cinderella, and The Nutcracker. Then in 2008, and ending in 2016, the same theme was used: A Day in the Life of an Elf.

The “Holiday Show” was where you would take a photo with Santa. There were highly animatronic shows that made the experience seem “enchanted.” I recall riding on an indoor train they had set up in the 1960s.

Ahh…the good ol’ days. I know…I know. We are not supposed to pine for those “good ‘ol days.” Such time periods vary according to our own life experiences. I’m limited (as you are) to the ones I can remember.

Christmas past was also a time when we all mailed out Christmas cards—unless your religious views dictated only a “holiday card.” From my earliest recall, I remember carolers coming to our home. Sweet times indeed.

Back then, visits with Santa were free. Yes, free! Then malls began putting expensive photo packages in place of a simpler act of goodness to visitors. Now, a Santa visit requires a plastic shield! Or the new in-thing…virtual Santa visits!

So, yes, I am longing a bit for Christmas past. The Bible says, however, “Don't long for ‘the good old days.’ This is not wise.” Ecclesiastes 7:10 (NLT) Hmmm.
Maybe some bold retailer will one day re-create a Christmas celebration that puts the wonder back in the eyes of children.

I triple dog dare ‘ya.
That’s Forward Thinking. Click on the link to the right to connect via Facebook.
You can find a number of YouTube episodes and podcasts of Mark’s program, Moving People Forward at https://www.youtube.com/channel/UCosyuBzdSh1mXIas_kGY2Aw?
For more information on the Elfstrand Group, please visit www.elfstrandgroup.com
Articles of interest:
https://en.wikipedia.org/wiki/A_Christmas_Story