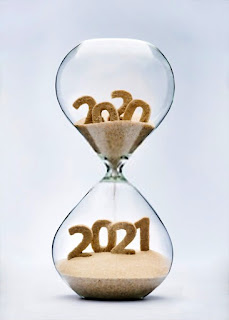 It’s time we said farewell to the year 2020. Or as many might otherwise say, “Good riddance!!” C’mon, has it really been that bad? (You answer.)At the top of the list of year-end wishes is to send Covid-19 packing. Perhaps it will happen. Thanks to Pfizer and other brilliant pharmaceutical research minds that have developed effective vaccines. Let’s pray they are effective without any long term harmful effects.

The past year, we witnessed the Hallmark Channel bidding farewell to family friendly programming. Under intense pressure from LGBTQ groups, the cable channel promised to add homosexual storylines in its Christmas movies. One such episode included a “couple” adopting a child. Well, yeah. So called “married men” can’t have kids the way God designed!

Soon we’ll by saying goodbye to The Donald. Mr. Trump is accustomed to saying, “You’re fired!!” but not so accustomed to hearing it. His loss is mostly attributed to his unapologetic behavior. Had he listened to his numerous spiritual counselors and matured with a spirit of humility, perhaps his future would have been different.

We can also kiss goodbye to an era of policies that save the lives of babies. That’s because Time magazine’s “Persons of the Year” (Biden and Harris) couldn't care less about the personhood of the most vulnerable humans: babies. They’ve let it be known that no life in the womb will be safe under their leadership.

Late this year, it was hasta la vista to the ridiculous policy of allowing just about any creature to be allowed on airplanes as “emotional support animals.” Thankfully, the Department of Transportation brought some common sense to this issue. The policy change came after incidents including a woman from New Jersey who attempted to get a peacock named “Dexter” onto a United Airlines plane. She was denied. As was the lady hoping to have her “emotional support squirrel” on board with her. The DOT considered miniature horses and Capuchin monkeys as flying companions but finally said no. Sanity prevailed.

The year 2020 leaned us further into rejecting American heroes from our past. People like Thomas Edison, James Madison, Thomas Jefferson, James Monroe, Herbert Hoover, Theodore Roosevelt, John Muir, Daniel Webster, Abraham Lincoln, George Washington, and Franklin Roosevelt. All of them are on the “bad” list of the San Francisco Unified School District for some form of “offensive” behavior in the eyes of the district’s school name committee. The hearing in October listed 44 bad boys in all. They are hoping to force the re-naming of one-third the total number of schools in the district.

Edison gave us the light bulb but apparently his not-so-bright action was to electrocute animals. Perhaps in the future our streets and buildings will follow the lead of the formerly named Washington Redskin football team—now just known as “The Washington Football Team.” (Until they decide to remove WASHINGTON from the team name.) In the future, honor only PERFECT people.

We were unable to brush away the hyper-sensitivity groomed “snowflake” behavior. These are the persons who are quite easily offended. A last minute nominee for this year’s Snowflake Award included the person who sent a Minnesota nurse a complaint letter over Christmas lights. The letter said the lights are a “reminder of the systemic biases against our neighbors who don’t celebrate Christmas or who can’t afford to put up lights of their own.” I doubt Halloween decorations were found so offensive.

Lastly, goodbye to good taste in Nativity scenes. Even the Vatican manger scene in Saint Peter’s Square generated several reviews of what was considered “distasteful.” Comparisons included “Mummified Mary,” “Weeble Jesus,” “Martians,” “toilet paper rolls,” and “astronauts”—all describing the figures set out to represent the Holy Family, the Magi, and the shepherds at Bethlehem.

Adios, 2020. My challenge to 2021 is to reject absurdity. An almost impossible task, no doubt. In fact, it’s likely to get worse!
As Jesus of Nazareth foretold, there will be “People fainting with fear and with foreboding of what is coming on the world. For the powers of the heavens will be shaken.” Luke 21:2(ESV) The end times will be brutal.

That’s Forward Thinking. Click on the link to the right to connect via Facebook.
You can find a number of YouTube episodes and podcasts of Mark’s program, Moving People Forward at https://www.youtube.com/channel/UCosyuBzdSh1mXIas_kGY2Aw?
For more information on the Elfstrand Group, please visit www.elfstrandgroup.com
Articles of interest:
https://christiannews.net/2020/11/25/hallmark-movie-the-christmas-house-to-include-homosexual-men-adopting-child/
https://norcalpublicmedia.org/npr-news-feed-national/grounded-emotional-support-animals-no-longer-guaranteed-free-flights
https://www.breitbart.com/faith/2020/12/11/williams-vatican-unveils-hideous-nativity-scene-saint-peters-square/
https://www.christianheadlines.com/blog/minnesota-nurse-received-anonymous-letter-calling-her-christmas-lights-harmful-to-others.html?utm_source=ChristianHeadlines%20Daily&utm_campaign=Christian%20Headlines%20Daily%20-%20ChristianHeadlines.com&utm_medium=email&utm_content=4053936&bcid=36c3bb982585341a12a47e2287c27d93&recip=541238255%20
Posted by Mark Elfstrand at 1:00 AM