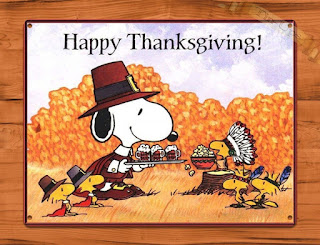 "What's this? A piece of toast, pretzel sticks, popcorn!" she says. "Where's the turkey?!” And so goes the conversation at the Thanksgiving dinner hosted by Charlie Brown with the gang of Peanuts fame. The question comes from a very disappointed Peppermint Patty in the television special, A Charlie Brown Thanksgiving that first aired in 1973. (This year you can watch it on PBS or on Apple+ TV)

In this animated story, Charlie Brown and Sally were intending to go to their grandmother's house for Thanksgiving dinner. The plan gets interrupted when Charlie Brown gets a phone call from the aforementioned Ms. Patty. She ungraciously invites herself to Charlie Brown's house for the annual feast.

This actually leads to TWO Thanksgiving dinners. The first was Charlie Brown’s unworthy offering to his companions—served up by the always helpful Snoopy. That’s the one our Peppermint friend dissed in her role as the designated complainer. However, Grandma comes to the rescue! All are invited to her place for the real meal deal. Thanks abound!

In 2020, we are likely to hear many conversations around the Thanksgiving table that reveal far less than gratitude. It may all start with a complaint over the limits placed on the size of our holiday gatherings. Here in Illinois, the strong suggestion has been made to feast only with your nuclear family.

Next, we may hear a round of grumbling about what it took to get the fixings! Stores are expected to be crowded with lines, perhaps, strung out in waiting queues. Just like the olden days of March of 2020! Fine, I suppose, if you're in Florida or other warm climate locations. But standing outside in Chicago??

Then let’s hear it from those most impacted by the COVID Holiday Catastrophe. Hospital workers, angry with no room in their inns for patients. High school athletes forbidden from playing winter and maybe spring sports, based on our Governor’s edict. Business owners sweating bullets over another undetermined length of closures, which may kill them in the not-so-long run. It’s enough to make Peppermint Patty lose all her flavor.

But back to Charlie Brown. Indeed, his feelings were hurt by the ungrateful Ms. Patty. But now Marcie assumes responsibility for turning the conversation in the right direction and explains to all what the day is really about. In her words: "Thanksgiving is more than eating, Chuck. You heard what Linus was saying out there. Those early Pilgrims were thankful for what had happened to them, and we should be thankful, too. We should just be thankful for being together. I think that's what they mean by ‘Thanksgiving,' Charlie Brown.”

In our hard times, can we truly be thankful? Of course. Leaders should help inspire us to do that.

George Washington offered us these opening words in his Proclamation of 1789:
Whereas it is the duty of all Nations to acknowledge the providence of almighty God, to obey his will, to be grateful for his benefits, and humbly to implore his protection and favor—and Whereas both Houses of Congress have by their joint Committee requested me "to recommend to the People of the United States a day of public thanksgiving and prayer to be observed by acknowledging with grateful hearts the many signal favors of Almighty God…"

This tradition of proclamations advocating a national day of Thanksgiving have continued over the years. Even in our nation’s hardest times. If our leaders can find a way to do it, so can we.

Colossians 3:15-16 tells us, “Let the peace of Christ rule in your hearts, since as members of one body you were called to peace. And be thankful. 16 Let the message of Christ dwell among you richly as you teach and admonish one another with all wisdom through psalms, hymns, and songs from the Spirit, singing to God with gratitude in your hearts.” (NIV)

And thank you, Marcie, for reminding us what this day is about.

Happy Thanksgiving.
That’s Forward Thinking. Click on the link to the right to connect via Facebook.
You can find a number of YouTube episodes and podcasts of Mark’s program, Moving People Forward at https://www.youtube.com/channel/UCosyuBzdSh1mXIas_kGY2Aw?
For more information on the Elfstrand Group, please visit www.elfstrandgroup.com
Posted by Mark Elfstrand at 1:00 AM