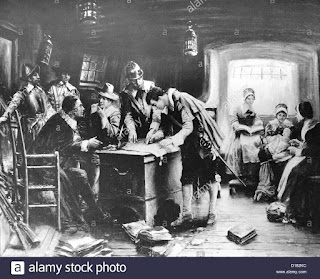 Perhaps like me, you’ve wondered… “what would the Pilgrims think of our modern day celebration of Thanksgiving?” Or, maybe that’s never crossed your mind. This year, it really hit me.

First, the Pilgrims, who referred to themselves as the “Saints,” would have been very sad to discover the New York Times to be fairly clueless on the real events of life in the early 1600s. The paper tried to “help us” get educated with their’ 1619 Project, which came out last year. The Times version wants American history rewritten with our new awareness of “anti-black racism” that purportedly exists “in the very DNA of this country.” Like when those Pilgrims sailed aboard the Mayflower to reach the New World.

Pilgrim scholars Richard Land and Michael Haykin have a different view. They assert that those early settlers who arrived at Plymouth were neither irreligious nor enslavers. Richard Land states that Pilgrim principles were “the ground out of which the Declaration of Independence grew.” He adds that the first Pilgrim colony’s governing document, the Mayflower Compact, is “the American Magna Carta.”

It took those early seafarers 11 weeks to voyage across the Atlantic Ocean. Some 102 Mayflower passengers made it—reaching Cape Cod, Massachusetts, on November 21, 1620. About 40 of them were known as Separatists–Christians who had separated from the Church of England. They found the idea of a state-run church to be toxic. They fled seeking religioius freedom and a better moral climate than they had witnessed in their time with the Dutch.

The remaining Mayflower passengers were known as “Strangers.” Their focus was more economic. Unlike the Separatists, faith in Christ was not their centerpiece for coming to the New World. It can be well assumed that writers for the New York Times would mostly be “Strangers.” Their columns often verify this.

When the Pilgrims celebrated the first Thanksgiving, they had plenty of good reasons. It should be noted that while our focus is often on the food, that first gathering in 1621 was dedicated more to prayer. Days of it—not minutes. Along with their survival, they were grateful for the colony’s first successful harvest.

If time travel were possible, we could bring them into the American version of Thanksgiving in 2020. Certainly they would be praying for our safekeeping amidst the pandemic. And for God’s Divine Intervention. The Pilgrims were big on that.

But wait until they hear about OUR traditions based on the holiday. Including the newest addition—Green Wednesday. Yes, my friends, Green Wednesday—now known as a “High Holiday”—may break cannabis sales records in 2020. Wow.

A veteran in the buzz-business referred to the “holiday” as homage to the “stress-reducing, sleep-enhancing, appetite-stimulating benefits” of weed and “the perfect opportunity to prepare for food fights with in-laws, all-day baking affairs, and defeating the indomitable itis.” I see the Saints shaking their heads in disbelief.

But wait until they find out that the day AFTER Thanksgiving is dedicated to a buying frenzy known as “Black Friday.” We might explain that this was supposed to be exuberant gift-buying activity for others. Nah. It’s for OURSELVES. More Pilgrim head shaking.

Then we’d have to explain Cyber Monday and Giving Tuesday. And Get Your Sanity Back Thursday. And Dread-the-Post-Office-Visit Saturday. (Okay, I made that last one up.) My…how we love our special Thanksgiving days! By now, many of the Pilgrims have suffered cardiac arrest and are no longer with us. Oops.

Instead of “Where Are You, Christmas?”, maybe Faith Hill could challenge us next year with “Where Are You, Thanksgiving?” Something went very wrong as we became “progressive.” It usually does.

Those of us who claim to follow Christ have often gone right along with all of this. Well, except maybe the weed thing. Maybe.

Jesus' words to us might well be the same as what He revealed to His friend John about the church in Ephesus, “But I have this complaint against you. You don’t love me or each other as you did at first!” Revelation 2:4 (NLT)

I think God might well be calling us to again be Pilgrim Saints—true pilgrims in Divine faith.
That’s Forward Thinking. Click on the link to the right to connect via Facebook.
You can find a number of YouTube episodes and podcasts of Mark’s program, Moving People Forward at https://www.youtube.com/channel/UCosyuBzdSh1mXIas_kGY2Aw?
For more information on the Elfstrand Group, please visit www.elfstrandgroup.com
Articles of interest:
https://www.baptistpress.com/resource-library/news/mayflower-among-great-turning-points-despite-nyt-claims/
https://www.adweek.com/retail/green-wednesday-second-only-to-4-20-as-a-high-holiday-set-to-break-cannabis-sales-records/
Posted by Mark Elfstrand at 1:00 AM