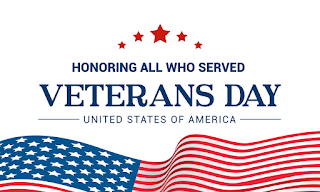 Wednesday is Veterans Day. It is on this day we find tributes to all who have served faithfully in our U.S. military. This differs, of course, from Memorial Day when we honor those who have given their lives in service to our nation.

This annual recognition of service men and women is often marked by parades in communities of all sizes. COVID-19 has changed that. In Indianapolis, they’ve declared, “The Veterans Day Council’s decision to cancel its in-person events was taken out of a great abundance of caution for safeguarding the health and well-being of spectators, participants, and volunteers.”

No doubt similar decisions have been made around the nation. Instead, veterans will have to accept virtual tributes. For example, the American Legion Mall in Downtown Indianapolis will feature a “Veterans Day virtual service and awards ceremony to honor veterans.”

Speaking of the American Legion, a long standing chapter in Wilmette, Illinois, has decided to call it quits. Again, blame it—at least in part—on COVID-19. The Legion does. The building will be demolished and the post is planning a farewell, 21-gun salute on Veterans Day.

And here’s the ironic twist. The Wilmette American Legion location is named after Peter J. Huerter. This 22-year-old U.S. Army soldier from the Chicago area died during the influenza pandemic of 1918! Peter had hoped to serve in World War I but he passed away on board a ship headed to Europe and was buried at sea.

Reporting on this story, the Chicago Tribune explained that spokesmen from the American Legion and VFW (Veterans of Foreign Wars) claim that falling membership numbers have hurt them for a while. But COVID-19 shutdowns have been crippling to their revenue streams. The typical moneymakers including BINGO games, spaghetti dinners, and banquet space rentals all faced cancellations with concerns over the virus.

Meanwhile, the coronavirus is no respecter of persons and, often, refuses to take prisoners. The House Veterans' Affairs Health Subcommittee got an earful on this in July. Rep. Neal Dunn, MD, from Florida said that "due to multiple inherent risk factors such as age, health, and difficulty physically distancing, veterans in state homes are particularly vulnerable to COVID-19.” Several states had reported numerous cases and deaths by mid-summer at veterans homes.

On September 28th of this year, CBS News laid claim that military suicides have increased by as much as 20% this year over 2019. Additionally, incidents of violent behavior “spiked as service members struggle under COVID-19, war-zone deployments, national disasters, and civil unrest…Army and Air Force officials say they believe the pandemic is adding stress to an already strained force.”

Early on in the pandemic, those who have already served were ready and willing to engage in the new battle against COVID-19. In March, the Army sent a notification to more than 800,000 retired soldiers to determine their willingness in returning to service in a volunteer capacity.” Initial response was very positive.

More than 9,000 retired soldiers re-upped to the Army’s call for retired medical personnel to assist in response to the pandemic. Additionally, hundreds of active duty soldiers were deployed to support field hospitals. In Chicago, The U.S. Army Corps of Engineers and the Illinois National Guard refurbished McCormick Place to treat victims. It turned out to be unnecessary. But thank you, vets!

For those veterans alive and well, they might feel particularly blessed this year by the restaurants and other businesses who continue to offer gifting tributes on November 11th. It appears this is not about to be curtailed as much as one would have thought—although access to these places may vary across the country. Everything from meals to car washes to haircuts and more were listed as available as recently as October 12th. (link below)

Yes, Veterans Day 2020 joins the list of celebrations gone awry. But for those who’ve served our country with honor, a simple word of thanks goes a long way.
That’s Forward Thinking. Click on the link to the right to connect via Facebook.
You can find a number of YouTube episodes and podcasts of Mark’s program, Moving People Forward at https://www.youtube.com/channel/UCosyuBzdSh1mXIas_kGY2Aw?
For more information on the Elfstrand Group, please visit www.elfstrandgroup.com
Articles of interest:
http://www.wbiw.com/2020/09/25/veterans-day-parade-2020-canceled-replaced-with-livestream-service/
https://www.chicagotribune.com/suburbs/wilmette/ct-wml-american-legion-post-rises-falls-during-pandemics-tl-1008-20201007-qg6vvglwjbdtdhhn2taqmkzj5i-story.html
https://www.cbsnews.com/news/military-suicides-increase-coronavirus-pandemic/
https://www.thespruce.com/veterans-day-freebies-discounts-4101988
https://www.medpagetoday.com/infectiousdisease/covid19/87826
Posted by Mark Elfstrand at 1:00 AM