Esprit de corps. Some might say “team spirit.” A more well-defined expression is that “feeling of pride, fellowship, and common loyalty shared by the members of a particular group.”

Last week, my wife Rhonda and I saw it in action. Big time. It was displayed by the close to 500 people gathered at the Hilton Hotel in Northbrook for the 8th Annual K-9 Comfort Dog Conference. I can’t recall being in a group where the mission was more clear, the heart for service was more evident, and the commitment to four core values any deeper. And I’ve been around the block for a while.

Tim Hetzner is the visionary and CEO of Lutheran Church Charities (LCC). They have two primary service aspects to the ministry. One is the 130 golden retrievers trained as comfort dogs that reside in 26 states and are deployed upon request through Lutheran churches across the country. The dogs go into schools, hospitals, retirement homes, and places where encouragement from an accepting friend is welcome.

The second important work of LCC is disaster and crisis response. Teams of volunteers will go to areas of devastation and help in ways most needed. It might be clearing away brush or damage. It might be rebuilding efforts of some kind. Often it includes some financial assistance.

The canines’ more demanding assignments are in the midst of these tragedies. Dogs are deployed following school shootings or a marathon bombing like in Boston. Vicious storms like tornadoes and hurricanes. Name the disaster, and a comfort dog has likely shown up with a handler to be available to those hurting. (See my blog from last week for more details.)

These twin service areas are derived from the four clear core values of LCC:


At the start of the conference, the trainers and handlers, those who house dogs and a bevy of volunteers, were all gathered together. CEO Hetzner asked the group, “Why do we exist?” Resoundingly, everyone can cite those four core values. Not in a bland, almost mindless corporate recitation, but rather enthusiastically affirming their commitment. It sounds almost silly to say, but they BELIEVE this stuff!

Over three days, I was able to interview approximately 25 of these service-minded people. To a person, Rhonda and I witnessed an unparalleled amount of joy and selflessness in their commitment. Beyond that, they have built a bond of friendship and loyalty to one another. And unbelievable esprit de corps.

The intriguing aspect of the K-9 Comfort Dog ministry to me is that it’s the animals that bring this team together! The mission is fed off the total acceptance of those golden retrievers. I think we met most of the 100 sweet pooches attending.

All who are deployed with the dogs are trained to become good listeners. It might be said that the skill of good listening is a fifth LCC value. You could not miss this message.

One of the keynote speakers was Eric Maddox. Eric served for ten years in the US Army as a Ranger and paratrooper. He then transferred to the Defense Intelligence Agency (DIA) as an interrogator. His work took him to Iraq, and he contributed significantly to the capture of Saddam Hussein.

Eric’s presentation detailed the frustrations of interviewing prisoner after prisoner without getting the information needed to track down the most wanted. Then...he decided to become a listener. And, more than that, to become an empathetic listener. The game changed almost immediately. Information came willingly. And it surprised many who thought it couldn’t be that simple.

After Eric’s talk, I began to think about the interactions of Jesus of Nazareth. Yes, He did go from town to town preaching. But His one-on-one interaction took Him to situations where the deepest questions and hurts found His attention. And He was never too busy to help.

His disciples, save one, got the message. Their lives were bonded together for life in sharing the eternal message of Good News.

Watch for a new YouTube program and podcast with Mark Elfstrand beginning in late summer.
For more information:
https://www.lutheranchurchcharities.org 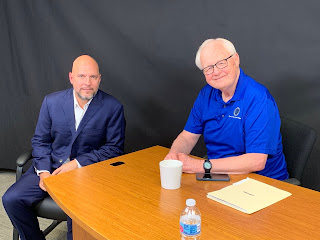