Thank You for Your Service!

Today is the Monday holiday version of Veterans Day. November 11th is the real deal and it always includes some “real deals” for vets and active duty military. I’m amazed and impressed with the number of companies that want to honor military service with free meals and other kinds of goodies.

Like with any form of employment, how one “serves” can be open to question. We call our government employees “civil servants.” Our military members are honored for “serving their country.” A common greeting to vets these days is “thank you for your service.”

I always feel a bit awkward when those with military background are asked to stand and be honored. Truth be told, I did not volunteer for my military service. In fact, I tried to avoid it. My father died while I was in high school. In receiving a draft notice a couple of years later, moving out of the apartment I shared with my mother would have created a significant hardship on her. At the time, I was paying my share of expenses.

There was another reason to seek a deferment. The Vietnam War was fully engaged. While my patriotism is very strong, most of us do not look forward to combat. I didn’t. So after my appeal was denied for undue hardship reasons, I chose to enlist in the Air Force. Frankly, they seemed to offer the best option for avoiding combat.

And so it was. My duty stations were Lackland Air Force Base in Texas for basic training; Keesler Air Force Base in Mississippi for technical training; and then my first true assignment—as “personnel specialist”at McClellan Air Force Base in Sacramento, California. Later, I would cross-train into broadcasting and head to a Naval base in Keflavik, Iceland, where I would be seen on the news each evening reporting sports on American Forces Radio and Television (AFRTS). Tough duty, huh?

Overall, serving the military was the best possible thing for my life at that time. The government took very good care of me. I met some of the most wonderful people on earth. And I took away a trade skill that serves me even to this day. Thank you, Uncle Sam.

In no way would I want to diminish the importance of the support services that the military requires. Even our radio and television operations with AFRTS provided a source of information, entertainment, and a sense of “home” to thousands who are separated from families and the land they love. Non-combat types of service are critical to mission support in many ways.

Now a reality check. Many with whom I served hated being in the military. Some even hated the military itself. The work they put in was not “service.” Their heart was not there to serve. They were there to put in their time and get out as fast as possible, doing as little damage along the way.

Even though there is no draft today, I trust there are many thousands who have bought into a recruiter's pitch and joined for benefits to be received. Instead of “thank you for your service,” perhaps what should really be said by those paying their way is, “You’re welcome for your job!”

Discerning people will understand what I am saying—because it’s true. For those who have sacrificed and served our country honorably, I salute you. For those like me who have served out of duty or obligation, thank you for honoring that service request to America. Our national safety would be in peril without these patriots.

For anyone in a job defined as “public service,” be sure you check your motives. You are indeed there to serve. It’s your priority. Your mission.

So to all with a heart like that, I say, “Thank you for your service!”

That’s The Way WE Work. Click on the link to the right to connect via Facebook.
Let’s Talk with Mark Elfstrand can be heard weekdays from 4-6 PM Central. To listen outside the Chicago area, tune to www.1160hope.com for live streaming or podcasts, or download the AM1160 app. 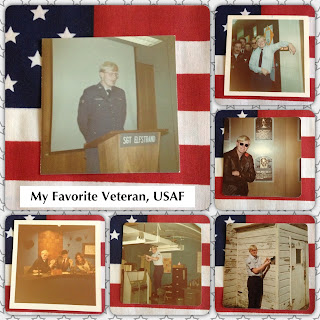 (Created by my wife, who I would not have met were it not for the Air Force!)
Posted by Mark Elfstrand at 3:00 AM