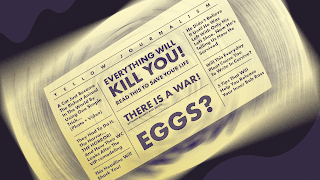 Among my first college classes (apart from my Bible college days) was a course in journalism. The definition hasn’t changed: the activity or profession of writing for newspapers, magazines, or news websites, or preparing news to be broadcast. Notice that the descriptor here relates to news.

Taking it a step further, I was taught that true news reporting involves objectivity. The site masscommunicationstalk.com spells it out right: “News is the factual report of an event. What the reporter sees is supposed to be reported. Objectivity means to report the facts exactly the same way as they occurred. It goes against objectivity if the reporter adds something from his own imagination. Comment, suggestion, or proposal is not the task of a news reporter…It will not be an objective reporting if the reporter wants to angle, slant, or shade the news.”

To be sure, many stories are reported every day that attempt to follow this definition. Yet there are a several ways in which those reporters or writers can find a way to “angle, slant, or shade the news.” The media world is increasingly misrepresenting the profession of news reporting with bias. Tragically.

Thus, a whole new genre of supposed journalism has fallen under the title of “fake news.” Blame Trump for hyping the term. But don’t deny it happens. A 2019 article in The Guardian stated, “We live in a time of political fury and hardening cultural divides. But if there is one thing on which virtually everyone is agreed, it is that the news and information we receive is biased.”

Social media hardly constitutes any form of true journalism. But it can seem like it to many. Instead, it moves to a more classic definition of yellow journalism: “journalism that is based upon sensationalism and crude exaggeration.” Truth be damned.

Adding to this are the media personalities (including late night talk hosts and others) who preach rather than entertain. A recent example of this is Bill Maher. On February 7th of this year, The Daily Wire reported that the atheist Maher made a claim that the January attack in Washington DC, at the Capitol, was a “faith-based initiative.” He laid blame on Christians who supported Donald Trump.

He wasn’t finished. “It’s fun to laugh at QAnon, with the baby-eating lizard people and the pedophile pizza parlors, but have you ever read the Book of [Revelation]? That’s the Bible,” said Maher. “That’s your holy book, Christians.”

The QAnon group deserves no space to espouse their views on media. Yet HBO and others have no problem with hosts like Maher making outrageous claims “based upon sensationalism and crude exaggeration.”

Maher obviously takes great delight in mocking those in the Christian faith. It’s one thing to disagree. It’s quite another to seek to align American opinion in bitterly opposing those of a beautiful faith who contribute greatly to the Republic.

Another gimmick of the brazen efforts to block the truth recently showed up in the mighty god of the marketplace, Amazon. In the past few weeks, the behemoth blocked anyone from purchasing the book, When Harry Became Sally: Responding to the Transgender Moment. The author, Ryan Anderson, is a highly credible researcher and was recently named president of the Ethics and Public Policy Center.

In a Breakpoint commentary on this, John Stonestreet wrote, “The case is so clear, in fact, that supporters of transgender ideology have to rely on coercion, power (think the Equality Act), and name-calling to end the debate and advance their cause. Enlisting corporations like Amazon, Facebook, and Twitter has proven particularly effective.”

David, writing in the Psalms, writes of these types. His plea is, “Let ruin come on him unexpectedly, and let the net that he hid ensnare him; let him fall into it—to his ruin.” Psalm 35:8 (CSB)

It’s time to stand up to yellow journalists and their marketing partners.
That’s Forward Thinking. Click on the link to the right to connect via Facebook.
You can find a number of YouTube episodes and podcasts of Mark’s program, Moving People Forward at https://www.youtube.com/channel/UCosyuBzdSh1mXIas_kGY2Aw?
For more information on the Elfstrand Group, please visit www.elfstrandgroup.com
Articles of interest: