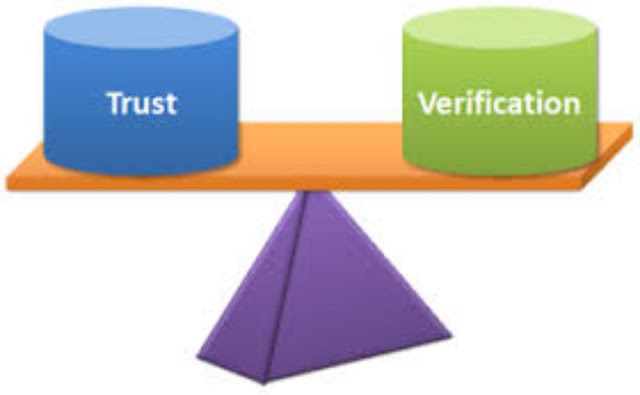 One of the most memorable seminars I attended in my business life was led by a successful radio programmer. His aim was to help the many naive station programmers who actually believed that they could negotiate with managers—some who were also owners. He pointed to oft-made promises of “future raises” based on performance that never materialized without being in writing.

He then challenged all to remember the words “Your father told you. 'Never trust ANYONE!!’" Actually, my father never gave me that message. Perhaps his own father should have given it to him. My dad’s blind trust hurt him on multiple occasions.

I didn’t like that advice then. And I still don’t. However…I have come to appreciate the reasons for it being said.

Several current examples abound. Fake news being one. How do we know what is fake and what isn’t?

Apparently, there is a self appointed arbiter of truth and reality. It comes via QAnon. I confess to being clueless on this source of reality up until recently.

Oh, I was aware of it, but could not give you two sentences about what’s behind it. When I saw a recent article explaining how this “voice of reason” in the minds of many was now impacting churches, I paid closer attention. For your edification on this connection, read QAnon: The Alternative Religion that's Coming to Your Church. (link below)

What I discovered you may already know. QAnon is named after “Q,” who posts anonymously on the online bulletin board 4chan (another mystery to me.) “Q” has a knack for finding evidence of so-called “deep state” abuses—and exposing them. One source found a 71% increase in QAnon content on Twitter and a 651% increase on Facebook since March. You read that right.

Where this gets dicey is when church people move from Gospel-centeredness to viral rumor spreading. An example from the Religion News Service article describes a pastor in Missouri who sat down to count the conspiracy theories that people in his church have been sharing on Facebook.

The list was long and included “claims that 5G radio waves are used for mind control; that George Floyd’s murder is a hoax; that Bill Gates is related to the devil; that masks can kill you; that the germ theory isn’t real; and that there might be something to Pizzagate after all.”

Since 2017, “QAnon, has coalesced in online forums and created millions of believers.” The concern is not just that these are among the many conspiracy theories that abound on the Internet, but that the audience among faithful Christians abounds as well. Adrienne LaFrance wrote in The Atlantic in June, “To look at QAnon is to see not just a conspiracy theory but the birth of a new religion.”

That view in and of itself may be overstated. To be fair, proven accounts of misleading or outright purposely slanted news leaves the door open for conspiracy theories. Within the Religion News Service QAnon story, they share that a 2018 poll “found that 46% of self-identified evangelicals and 52% of those whose beliefs tagged them as evangelical ‘strongly agreed that the mainstream media produced fake news.’”

The apostle Paul, in writing to the church in Thessalonica, penned these words: “But test everything. Keep what is good, and stay away from everything that is evil.” 1 Thessalonians 5:21-22 (NCV)

I tend not to write off all that is termed a “conspiracy theory.” If you read the Bible book of Revelation, you find startling predictions about world events in what are called, “the last days.” Some of those signs seem to be with us right now. So let’s keep “testing” for truth while avoiding “false religions.”

Meanwhile, I’m going to check out that Pizzagate. I wonder if they serve anchovies on a “deep state pizza?”
That’s Forward Thinking. Click on the link to the right to connect via Facebook.
You can find a number of YouTube episodes and podcasts of Mark’s program, Moving People Forward at https://www.youtube.com/channel/UCosyuBzdSh1mXIas_kGY2Aw?
For more information:
https://www.crosswalk.com/church/pastors-or-leadership/qanon-the-alternative-religion-thats-coming-to-your-church.html?utm_source=Crosswalk%20Daily%20Update&utm_campaign=Crosswalk%20Daily%20Update&utm_medium=email&utm_content=3584486&bcid=2eee33bc7ba0dcc36e0b7103cbb0ee89&recip=546631925%20